The Bishops’ Conference have issued a letter about returning in person to Mass at Pentecost (Sunday 5th June).

Please email any responses to Fr David Cain by Saturday 19th March. His email is given in the document.

The Diocese of Nottingham has the following vacancies in their Safeguarding Department:

Safeguarding Officer/Caseworker
Role: To promote excellent safeguarding practice, in line with local and national best practice, provide advice across the diocese and respond to safeguarding referrals and allegations.
Based at:  Diocesan Offices (1 Castle Quay, Nottingham, NG7 1FW)
Hours: 3 days per week (24 hours) with flexibility for working during evenings and Saturdays.
Salary: £32,000 per annum pro rata (£19,200 per annum)

Safeguarding Training Officer
Role: To deliver training courses throughout the diocese to raise awareness of safeguarding children and adults. To encourage good practice and support of procedures throughout parishes, in supporting clergy, parish safeguarding representatives and volunteers.
Based at:  Diocesan Offices (1 Castle Quay, Nottingham, NG7 1FW)
Hours: 3 days per week (24 hours) with flexibility for working during evenings and Saturdays.
Salary: £28,000 per annum pro rata (£16,800 per annum) 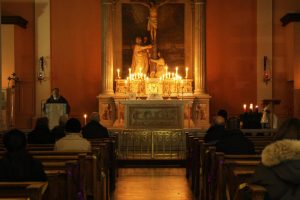 Fr Paul celebrated a Rorate Mass at St Mary’s on 17th December at 6.45am.

A Rorate Mass is the Advent Mass of Our Lady which takes its name from the Entrance Antiphon: “Rorate caeli”. “Drop down dew, ye heavens, from above, and let the clouds rain the just. Let the earth be opened and send forth a Saviour.”It is celebrated early in the morning and only by candlelight. The dawn represents the birth of Christ, and with His coming, the journey from darkness to light.

The Mass was celebrated ‘ad orientem’, facing East, as we look together towards the Coming of the Lord. 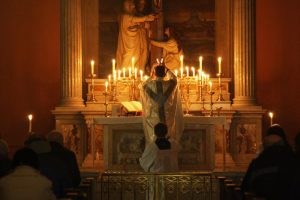 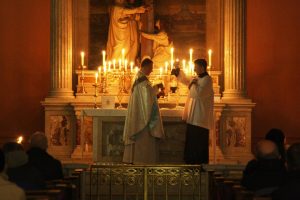 Today, the First Sunday of Advent is the beginning of a new season and also the beginning of the new Liturgical Year during which we prepare for the advent or Coming of Our Lord. The climax of this will be when we celebrate His birth at Christmas.

Advent is very much a ‘Marian’ time during which, like Our Lady, we wait. We think of the Annunciation (which is the dedication of our parish), the expectation she had of His birth, and of course she carried Him in her womb for nine months. In this sense she was the first tabernacle of the Blessed Sacrament. 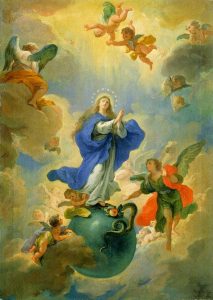 The Immaculate Conception  by Martino Altomonte, 1657-1745

Next Tuesday, 8th December we will celebrate the Solemnity of the Immaculate Conception of Our Lady and there will be an extra public Mass at 6.30pm that day. Of all the Marian dogmas taught by the Church, the Immaculate Conception is among the most important because it was the beginning of God bringing about our salvation after the Fall (Genesis 3). Our Lady is often called the New Eve because just like the First Eve, she was brought into existence in the state of perfect innocence. But as we know, the difference between the two is that whereas Our Lady was faithful to God, Eve was not.

The Immaculate Conception, does not, as many Catholics mistakenly think, refer to Christ’s conception. It refers to the fact that Our Lady was conceived without Original Sin. This means that she did not suffer any of the moral effects of Original Sin. In other words she was so perfect, she never for one moment entertained any thoughts contrary to purity, justice or charity and she had no inclination to sin whatsoever. But she could suffer things like pain and sorrow (Luke 2:35). Her Immaculate Conception was the beginning of our salvation because God was preparing the human race for the coming of His Son. Christ, being God and the Second Person of the Blessed Trinity was holiness and purity itself, and so His mother who carried Him and who gave Him His human flesh had to be without the slightest stain of sin. God could not be subject to Satan for one instant. 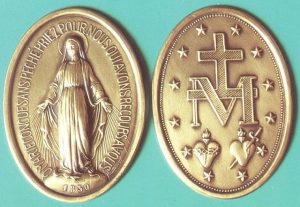 “O Mary conceived without sin pray for us who have recourse to thee.”

There is a popular medal of the Immaculate Conception, more commonly known as the Miraculous Medal and I know many of you wear it. Last Friday, 27th November was the Feast of Our Lady of the Miraculous Medal. Our Lady appeared to a novice of the Daughters of Charity, Sister Catherine Labouré on that same day in 1830 at the Rue du Bac in Paris. She had appeared to her earlier that year on 18th July and told her she had a special mission for her, but didn’t say what it was. Our Lady, during this second apparition was standing on a globe with her foot crushing the head of a serpent (Satan). This image comes from the protoevangelium (the first mention of the Good News) in Genesis 3:15 when God says to the serpent after the Fall of Adam and Eve, “I will put enmities between thee and the woman, and thy seed and her seed: she shall crush thy head, and thou shalt lie in wait for her heel.” This is the promise of the Redemption: the woman is Mary and her seed is Christ. Then there were rays of light coming from gems on her fingers. Our Lady said, “Behold the symbol of graces that I will shower down on all who ask me for them.” An oval frame surrounded Our Lady and Catherine could read this prayer in gold lettering on the oval frame, “O Mary conceived without sin pray for us who have recourse to thee.” (See the picture above). 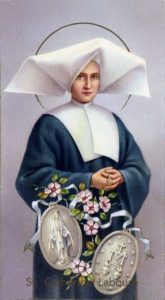 The frame turned and Catherine could see a cross with a large “M” representing Mary beneath it. Beneath the cross were two hearts, one surrounded with thorns which Catherine understood to represent JESUS, and the other heart was pierced by a sword which Catherine took to represent Mary, recalling the words of Simeon in the Temple that a sword of sorrow would pierce Mary’s soul (Luke 2:35). Our Lady told Sister Catherine to have a medal struck exactly according to this model, and that those who wear the medal properly blessed and repeat the prayer, “O Mary conceived without sin, pray for us who have recourse to thee” will have great graces, particularly when it is worn round the neck. Sister Catherine asked Our Lady why rays of light did not shine forth from all the gems on her hands, and she replied that this darkness represented “the graces for which people forget to ask.”

The first batch of medals was produced in 1832 and very quickly became worn by millions. Numerous stories of healings, conversions and other miracles came pouring in from the faithful all over the world who wore it, and this is how it came to be known as the Miraculous Medal.

The most famous conversion story was that of Alphonse Ratisbonne, a young Jew, to whom Our Lady of the Miraculous Medal appeared on 20th January 1842, in the Church of Sant’ Andrea delle Fratte in Rome. Alphonse’s older brother Theodore had converted to Catholicism and become a priest. Alphonse himself was not a practising Jew and he hated the Catholic Church partly because of his brother, and he said if one day he ever did change, he would become a Protestant but absolutely never a Catholic.

But while on a visit to Rome in 1842, Alphonse met with an Italian Baron also named Theodore, who insisted he came with him to a ceremony in St Peter’s Basilica, and he also persuaded him to accept a Miraculous Medal and to promise to copy down a very beautiful prayer: the Memorare. What great Apostolic zeal he had! Ratisbonne was actually really cross at the Baron’s boldness but then accepted very lightly and actually found it amusing.

A few days later a friend of the Baron died and so he went to arrange the funeral, and Ratisbonne went with him to the church of Sant’ Andrea delle Fratte, making violent criticisms of the Church and mocking Catholic practices as they walked along. The Baron went into the sacristy while Ratisbonne decided to look around the church.

When the Baron returned just a few minutes later, he did not find Alphonse where he had left him. He found him on the other side of the Church kneeling close to an altar, weeping. He no longer found a Jew, but a convert who ardently desired baptism. 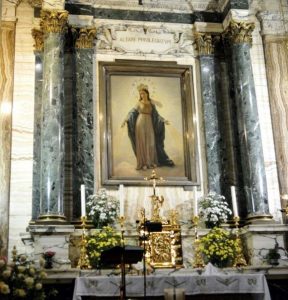 Ratisbonne himself tells us what happened in those few minutes:

“I had only been in the church a short while when, all of a sudden, I felt totally uneasy for no apparent reason. I raised my eyes and saw that the whole building had disappeared. Only one side chapel had, so to say, gathered all the light. In the midst of this splendour, the Virgin Mary appeared standing on the altar. She was grandiose, brilliant, full of majesty and sweetness, just as she is in the Miraculous Medal. An irresistible force attracted me to her. The Virgin made a gesture with her hand indicating I was to kneel and as if saying ‘very good!’ Although she did not say anything, I understood everything.”

News of his conversion spread and caused a real commotion all over Europe. Alphonse too became a priest and at the suggestion of Blessed Pope Pius IX, he and his brother founded the Congregation of Our Lady of Sion for the Conversion of the Jews.

In 1894, Pope Leo XIII, on the fiftieth anniversary of the apparitions at the Rue du Bac declared the miraculous conversion of Ratisbonne authentic and instituted the Feast of the Miraculous Medal for 27th November every year. On 27th July 1947, Venerable Pope Pius XII canonised St Catherine Labouré, and her incorrupt body is venerated to this day at a side altar in the Rue de Bac chapel in Paris. 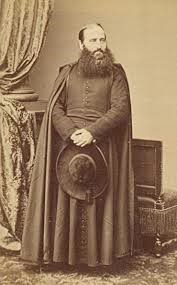 Anyone who would like to have a Miraculous Medal, please ask me. I have a good supply of them. It should be worn blessed, and as Our Lady said, preferably around the neck.  May it protect us against the darkness and confusion which has so taken hold of the world and the Church in our times. The Postcommunion prayer for the Feast of the Miraculous Medal sums it up:

Lord God Almighty, You have willed that all things should be given to us through the Immaculate Mother of Your Son: grant that under the protection of this mighty Mother, we may escape all the dangers of these our times, and in the end may come to life everlasting. Through the same Christ our Lord. Amen.

I wish you all a happy and fruitful Advent.