This is the first Sunday in ‘Ordinary Time’ we have had since before Lent, and so the priest returns to wearing green vestments. This is going to be rather short lived since next Sunday we celebrate the Solemnity of the Princes of the Apostles, Saints Peter and Paul who were martyrs and so red is worn. Red is also going to be worn tomorrow because it is the Feast of two very important English martyrs: St John Fisher and St Thomas More. Both were executed under King Henry VIII in 1535.

St John Fisher (1469-1535) was the Bishop of Rochester here in England. As well as being very holy, he had a great intellect, was a great scholar and was regarded by many as being the most holy and learned prelate in the whole of Christendom. He worked very hard as a Bishop, not only in his own diocese, but he also called the other Bishops to greater holiness in the way they led their flocks. He had also been King Henry’s teacher when he was a boy, but even this didn’t prevent Henry from having Bishop Fisher executed for opposing him many years later. Henry had held Bishop John Fisher in the highest esteem for many years as indeed did the whole of Europe. Henry once asked Cardinal Reginald Pole (1500-58) if he had met anyone in Europe comparable to Fisher in scholarship and holiness, and he replied that he had not.

St Thomas More (1478-1535) was a layman with a family and a good friend of Henry VIII. He too was very holy and prayed for long hours as well as performing many penances. Once while Thomas was hearing Mass, King Henry sent for him. Thomas remained until the Mass was finished, but sent this message, “As soon as my audience with the King of Heaven is ended, I will at once obey the desire of my earthly king.”  King Henry made him Chancellor of England. He enforced the law of the land and saw that the poor were protected against any injustice.

The story of these two men’s martyrdom is well known. Henry wanted to divorce his wife Catherine of Aragon and marry Anne Boleyn because Catherine was unable to give him a son and heir. Henry at this time together with the whole of England was still Catholic, and Henry had even written against the errors of Luther which prompted Pope Leo X to give him the title “Fidei Defensor” or “Defender of the Faith” in 1521. The title was later revoked by Pope Paul III when Henry was excommunicated but then reinstated by Parliament to Henry and his successors as defender of the Protestant faith, a title the monarch holds to this day.

Henry asked the Pope for an annulment of his marriage to Catherine, but after examining the case the Pope decided there were no grounds for annulment and that the first marriage was valid. The Pope reaffirmed the divinely revealed truth that no power on earth can dissolve a valid marriage and therefore Catherine of Aragon was his lawful wife. Henry was furious and then claimed that he was head of the Church in England, and granted himself the annulment.  He then forced all Bishops and all government officials to swear two oaths: first, that the king was head of the Church, and secondly, that he had the right to name his own heir to the throne despite what the law said.  One might imagine that the Bishops would have protested at this. But no, they went along with it, even though it is clear in Scripture and an infallible teaching of the Church that Our Lord made St Peter and his successors the visible head of the Church on earth and that marriage is indissoluble (unbreakable). St John Fisher was the only Bishop who witnessed to the truth by telling Henry he was wrong. He said that even before Christ had redeemed the world, while Israel was still under the old dispensation, St John the Baptist suffered martyrdom because he criticised the invalid marriage of King Herod and Herodias. And he said this should be the example for us, and that if under the old dispensation a king could not undo marriage, then neither under a redeemed humanity can a Christian king undo marriage. This didn’t go down too well and Bishop Fisher was imprisoned in the Tower of London. It was at this time that the Pope named Bishop Fisher a Cardinal thinking Henry wouldn’t harm a Prince of the Church. But Henry only became more enraged and Bishop Fisher then suffered the same fate as John the Baptist by having his head cut off. 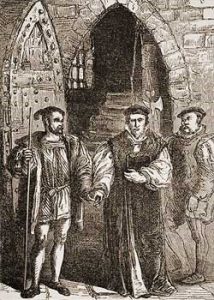 St Thomas More, being a lawyer was asked to defend Henry’s divorce but he would not. He made it clear that no king or government has authority over the Sacraments and that no king can make himself above the Church. He told Henry, “I am the King’s good servant, but God’s first.” Thomas was arrested and also imprisoned in the Tower of London. False charges were brought against him. He was tried in Westminster Hall and then condemned to death for high treason and beheaded. 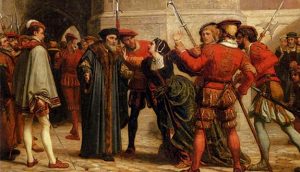 St Thomas More saying farewell to his daughter at his arrest

Overnight England became separated from Rome, and the Church had to go underground. The One Holy, Roman, Catholic and Apostolic Church was outlawed. If you went to Mass you were harassed and fined. If you were found to be a Catholic priest or hiding one you would be executed.

Our Lord says in today’s Gospel, “Do not be afraid of those who kill the body but cannot kill the soul; fear Him rather who can destroy both body and soul in Hell” (Matthew 10: 28). At Baptism we are given the Gifts of the Holy Spirit and these are strengthened in Confirmation to help us bear witness to the Truth. The only thing that blocks this out is sin. It blocks our courage and silences us when we should speak out. We live in an age today when the truth about marriage and the family is under constant attack to such an extent that even those who believe in Our Lord are frightened into silence. Sister Lucia of Fatima wrote in a letter to Cardinal Carlo Caffarra (1938-2017) in the 1980s, “The final battle between the Lord and the kingdom of Satan will be about marriage and the family… Don’t be afraid, because whoever works for the sanctity of marriage and the family will always be fought against and opposed in every way, because this is the decisive issue …nevertheless, Our Lady has already crushed his head.” The truth of this prophecy is more evident today than ever.

God has given us the truth so that we can live it and hand it on to others, and when necessary defend it.  God has put each one of us on this earth at this particular time in history. The recently canonised St John Henry Newman who visited our church in 1845 wrote, “God has created me to do Him some definite service. He has committed some work to me which He has not committed to another. I have my mission.” God had a mission for St John Fisher and St Thomas More that they would speak the truth in love in their time. And He asks the same of us today. “Everyone therefore that shall confess Me before men, I will also confess him before My Father who is in Heaven. But he that shall deny Me before men, I will also deny him before My Father who is in Heaven.” (Matthew 10:32-33). If we’re ever faced with the choice of dying for the sake of Christ or denying Him to save one’s life, we must remember that the worst thing our enemies can do is kill our body, but they cannot kill the soul. It is better to save one’s soul than to preserve one’s physical life.

So let us pray today that through the intercession of these two great saints, John Fisher and Thomas More, God will give us the courage to proclaim our faith publicly when we are called upon to do so. 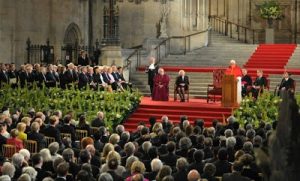 Pope Benedict XVI addressing the Houses of Parliament in Westminster Hall on 17th September 2010.
This is where the trial of St Thomas More took place