This month of July is dedicated to the Most Precious Blood of JESUS and this devotion goes right back to the beginning of Christianity. St Peter writes in his First Letter, “You know that you were ransomed from the futile ways inherited from your fathers, not with perishable things such as silver or gold, but with the Precious Blood of Christ, like that of a lamb without blemish or spot” (1 Peter 1:18-19). JESUS is the spotless Lamb of God who takes away the sins of the world.

Many of you will know the hymn “Glory be to JESUS” in honour of the Precious Blood. We still sing it today. Here is an extract:

The story of Cain and Abel (Genesis 4:1-16) referred to in verse 4 is well known. Both brothers made an offering to God. Abel’s sacrifice was pleasing to God because he gave to God from the best he had while Cain did not. This gave rise to the sin of hatred and fratricide with Cain brutally killing Abel with a rock. The earth soaked up Abel’s blood as it cried out to Heaven for vengeance. This crying out prefigured the scene on Calvary, where Christ’s Blood cried to Heaven for the sins of mankind.

In the Old Testament God is often regarded as the “Avenger of Blood”. “For your lifeblood I will surely require a reckoning; of every beast I will require it and of man; of every man’s brother I will require the life of man.  Whoever sheds the blood of man, by man shall his blood be shed; for God made man in His own image” (Genesis 9:5-6). So the shedding of blood always had to be avenged and so Cain would have to be punished for killing his brother. The Jews, even in the case of an accidental death, would cover up the blood with dirt for fear God should see the blood, smell it and strike the person down. But with the coming of Our Lord, the God man, His Blood was exposed to the Father so that the Father might see It and be appeased by It. At Mass, the priest elevates the Precious Blood in the chalice, certainly so that the people may see It and adore It, but also begging God to see It, be appeased by It and show mercy to us all. When God, the “Avenger of Blood” sees the Most Precious Blood of His Divine Son, He dare not strike us! 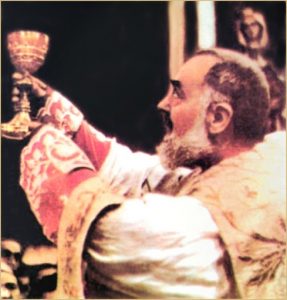 This is because Our Lord shed His Blood and laid down His life as a sacrifice to atone for all our sins, the sins of the whole world, in all times and in all places. With sin being an infinite offence against God it demands satisfaction and atonement by the life of an infinite victim offered up in a bloody sacrifice.

But why, you may ask, is the Blood of Christ able to save us? Answer: Because Christ is God. In the Incarnation, God the Son, the Second Person of the Blessed Trinity united Himself to our human nature, and so JESUS is fully God and fully man. This is what theologians call the “hypostatic union”, the union of the human and divine in the one Person of Christ. Therefore every act of JESUS, the God man is of an infinite value because of whose Body, whose Blood and whose human Soul it is. We read in the Letter to the Hebrews, “without the shedding of blood there is no forgiveness of sins” (9:22). Neither is our ransom paid by the blood of bulls and goats but by the Precious Blood of Christ (Hebrews 10:4).Yes, the Blood of Christ is human blood, but it is also the Blood of God, and so the tiniest drop of His Blood, being of an infinite value, would have been enough to atone for every sin ever committed and to redeem an infinite number of people and an infinite number of universes, so precious is the Blood of Christ.

There is a moving scene in Mel Gibson’s 2004 film “The Passion of the Christ” where the Roman centurion, traditionally known as St Longinus, pierces Our Lord’s side as He hangs dead on the Cross with such force, that it pierces His Sacred Heart causing the Blood and water to flow from It over the centurion, bringing about his instant conversion. The centurion kneels down in adoration. 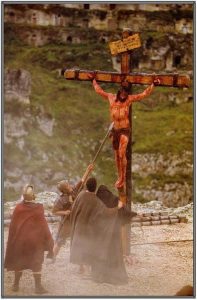 Again in the Old Testament, at the time of Moses, God was going to rescue the Israelites from slavery to the Egyptians. And you might remember God was going to punish the cruelty of the Egyptians and rescue Israel by the Ten Plagues – ten supernatural disasters inflicted on the Egyptians (Exodus 7-11). But even after nine plagues, Pharaoh’s heart remained hardened and he refused to free Israel. So God sent the tenth plague – the worst of all. He sent the ‘Angel of Death’ to strike down the first born of the Egyptians. But before that happened, God commanded Moses to make every Israelite family take a spotless male lamb and sacrifice it and consume it. And they were to put the blood of the lamb on the wooden doorposts, so that when the Angel of Death passed over, he would not dare to enter any house where the blood of the lamb had been smeared. 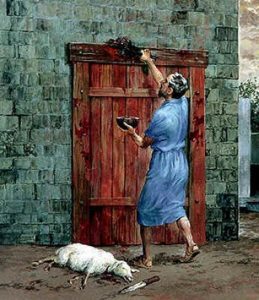 Those who had smeared the blood of the lamb on their doorposts were saved, but for the Egyptians who had not, it was a night of grief and wailing. The blood of the lamb had the power to save the Israelites only because it was a sign, a figure, a foreshadowing of the Blood of Christ, the true Lamb of God spoken of by the prophets being poured out on the Cross.

Twelve centuries later, the greatest of all the prophets, St John the Baptist was preaching the baptism of repentance by the River Jordan, when he saw the One whom he had been called to point out coming towards him. Pointing at JESUS he called out, “Ecce Agnus Dei.” “Behold the Lamb of God who takes away the sins of the world.”  Now a new and far superior Covenant would be put in place. The animal sacrifices of the Old Covenant only had any effect because they pointed to the perfect sacrifice that would be made by Christ. The blood of animals has no power to save anybody or to atone for any sin, but in the sense that they pointed to Christ and His sacrifice they had a healing and powerful effect. And this infinite and perfect sacrifice of Christ on the Cross is made present to us at every Mass. As the priest consecrates the bread and wine, by the miracle of transubstantiation they become the Body, Blood, Soul and Divinity of Our Lord. The sacrifice He made on Calvary two thousand years ago is made present on the altar as if we were there ourselves. 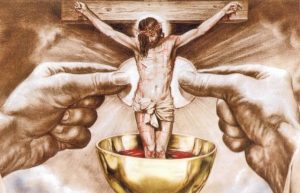 Offering the Precious Blood can also help the Holy Souls in Purgatory. Our Lord taught St Gertrude (1256-1302) to say the following prayer:

“Eternal Father, I offer Thee the most Precious Blood of Thy Divine Son, JESUS, in union with the Masses said throughout the world today, for all the Holy Souls in Purgatory, for sinners everywhere, for sinners in the universal Church, those in my own home and within my family.”

As we know, the saints have often been able to see the Holy Souls in Purgatory. A poor soul once appeared to Blessed Henry Suso (1295- 1366) and cried out, “Blood, Blood brother is needed, that we may obtain relief! Masses, Masses should be said, as we have promised one another!” 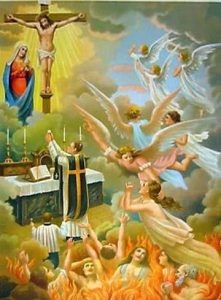 Masses for offered  the Holy Souls in Purgatory help them

It is through the Sacrifice of the Mass that Christ’s Blood is shed anew, but in a mystical and unbloody manner. This is why we have Masses said for the living and for the dead, because Christ’s Blood cries out on our behalf.

Precious Blood of JESUS, price of our salvation, save us!