I hope you are keeping well. We priests thankfully remain fine, and as always we remember you all daily and your intentions at the altar. Thank you for your continued prayers for us. Today, 1st May is the Feast of St Joseph the Worker and I celebrated Mass this morning at St Joseph’s altar in the church. I’d never said Mass on that altar before but it was really beautiful. That altar was in the original church and so Fr Luigi Gentili, the first Rosminian Father in England, would almost certainly have celebrated Mass on it. An awesome thought for me this morning! 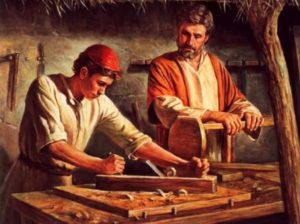 Today’s Feast is quite recent and was instituted in 1955 as a response to ‘May Day’ that the Communists had hijacked to promote their atheistic ideas. In the first part of the twentieth century the Communists were in power in many parts of the world. Pope Pius XI in 1937 realised the great threat Communism posed to the world and called upon St Joseph to protect the Church from Communism’s many errors. Catholics began to pray to St Joseph fervently under the title of “Terror of Demons”. For Communists the highest good is not to serve God but the State. They stripped individuals of their human dignity and used them as machines for the prosperity of the State. But for us, the work we do, whatever it is, should always be done to the glory of God. As the psalm says, “Unless the Lord builds the house, those who build it labour in vain” (127:1). So when Venerable Pope Pius XII eighteen years later gave us the Feast of St Joseph the Worker he said to the workers, “…the humble workman of Nazareth [St Joseph] not only personifies before God and the Church the dignity of the man who works with his hands, but is always provident guardian of you and your families.”

So St Joseph really is the light in the darkness for all those who are in the position of having their human rights and dignity stripped of them by evil regimes who seek to eliminate God from the minds and hearts of families and nations.

St Joseph is a very powerful intercessor. He has come to greater prominence in the Church over the last hundred or years or so, but he was always there. St Teresa of Avila wrote in her autobiography in the sixteenth century,

“To other saints the Lord seems to have given grace to succour us in some of our necessities, but of this glorious saint my experience is that he succours us in them all, and that the Lord wishes to teach us that as He was Himself subject to him on earth (for being His guardian and being called His [foster] father, he could command Him) just so in Heaven He still does all that he asks.”

St Padre Pio said, “Ite ad Joseph. Go to Joseph with extreme confidence, because I do not remember having asked anything from St Joseph, without having obtained it readily.” So many of the saints have said the same. Next to Our Lady he is the most powerful. He is one of the truly great saints for our time. He was the head of the Holy Family, and with marriage and the family (the basis of society) so under attack today, we should call on him to protect all families.

In the Litany to St Joseph the Church invokes him under many titles. He is the Protector of the Holy Church and he is also the Patron of the Universal Church. 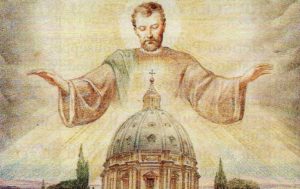 Our Lord permitted him to be His protector while he was a child here on earth, and so he continues from Heaven to protect the Mystical Body of Christ on earth (the Church), which as Pope St Paul VI said, “is always weak, is always under attack, always in a state of peril.” Let us invoke his powerful aid today for wherever the Church is persecuted, and ask him that our own churches here and throughout the world be opened very soon, so that once again we will have access to the Sacraments which as baptised Catholics we all have a right to.

He is also the Patron of a happy death (dying in a state of grace) due to the assistance given him at his death by JESUS and Mary. If we invoke him in this regard he will surely obtain the same for us.

Finally, on this particular Feast let us ask St Joseph to help us do our work well, whatever that work may be. Please remember to keep in your prayers those who have no work or those who have been laid off from work, or who have lost their jobs due to the Coronavirus, and those who as a result of the virus are working in dangerous circumstances.

Let us also pray for all the sick and deceased of the parish.