In St Peter’s Square on All Saints Day 1950, before a throng of Cardinals, Bishops and faithful from all over the world, Venerable Pope Pius XII (1876-1958) proclaimed ex cathedra the dogma of the Assumption of Our Lady into Heaven. In doing so the Pope exercised the charism of infallibility. He said: 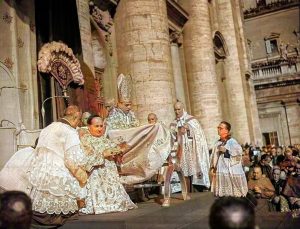 Venerable Pope Pius XII during the Proclamation of the Dogma in St Peter’s Square, 1st November 1950

And so within the lifetime of many of you reading this, a dogma which has been believed from the beginning of the Church and has been celebrated with great joy and solemnity throughout the centuries was finally proclaimed de fide (of the Faith) and must therefore be believed by all Catholics. By proclaiming this dogma, Pius XII put to rest any doubts about it, and also corrected any errors that may have existed in modern times about Mary. 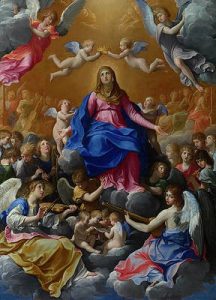 As we heard in the definition of Pius XII, when we say Our Lady was assumed into Heaven, we don’t just acknowledge that her soul was taken up into Heaven, as is the case with everyone else who has attained heavenly glory – but that at the end of her earthly life she was taken up soul and BODY into Heaven, her body suffering no decay. Death and corruption are the penalty of Original Sin. Mary was conceived without Original Sin and she committed no actual sins. She is the Immaculate Conception. Her whole life had been one continuous “yes” to God. “Be it done unto me according to Thy word” (Luke 1:38). The Pope didn’t indicate whether Mary had died as we don’t know for sure one way or the other. What is important is the fact she was taken up to Heaven body and soul. And in fact there is some difference between the Eastern and Western Churches as to how exactly it happened. The Eastern Churches actually refer to this feast as the “Dormition of Our Lady”. Dormition is a word for sleep and refers to her death, whereas the Western Church tends to portray her as being taken alive at once body and soul into Heaven, although there is a tradition in the West that she first died, was carried to her tomb by the Apostles and then three days later was taken up to Heaven. This is why the Pope said “having completed the course of her earthly life…” so it’s open to some interpretation.

Saint Maximus the Confessor (d.662) in The Life of the Virgin wrote down the story that long preceded him:

“The holy Apostles encircled the bed on which lay the Holy Theotokos’ [ie. the God-bearer’s] body. . . .They honoured it with hymns and praise. . . .Then the Apostles called on blessed Peter to deliver a funeral prayer. . . .He prayed, and immediately they wrapped in a holy shroud and anointed with myrrh the body that contained the uncontainable, the King and Creator of all things visible and invisible, and they laid it on a bed.” 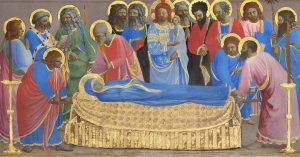 It is also significant that whereas we have the tombs and relics of every Apostle and the bones of many early saints, there is no church that claims to have the body of Mary, and this is because it’s not on earth – it is in Heaven. Furthermore, references to the Feast of the Assumption as being believed from the time of the Apostles date back to the Fourth Century.

There is, however, Scriptural evidence as to the whereabouts of Mary’s body and soul. And the Church today gives us an important passage from the Apocalypse as our First Reading. “A great sign appeared in Heaven, a woman adorned with the sun, standing on the moon, and with the twelve stars on her head for a crown. She was pregnant and in labour, crying out aloud in the pangs of childbirth…” (12:1-2). Now the woman described is unquestionably Mary, because it is a beautiful woman who gives birth to a child who can be none other than JESUS.

Furthermore, the first line of this reading also refers to the “Ark of the Covenant” which is one of the titles of Our Lady. “The sanctuary of God in Heaven opened, and the Ark of the Covenant could be seen inside it” (11:19). Remember if you can what was in the Ark of the Covenant in the Old Testament. Firstly, it was a box of acacia wood, covered in gold. Inside it were placed the two tablets on which God had inscribed the Ten Commandments. Then there was the rod of the High Priest Aaron, and some of the manna (the miraculous bread) with which God had fed the Israelites as they journeyed through the desert for forty years. Now the point is, in this Ark dwelt the very presence of God. He dwelt mysteriously within it, rather like our Catholic understanding of the tabernacle in our churches. 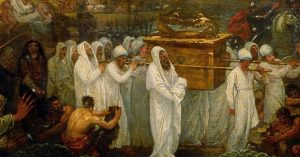 The Ark of the Covenant being carried in the Old Testament

But Mary is the true Ark. Why? Because she contained in her womb what the Ark of the Old Testament only foreshadowed. Just as the Ark contained the Ten Commandments, Mary bears the one who is the fulfilment of the Law. Just as the Ark carried the rod of the High Priest Aaron, so Mary carries the true High Priest who will offer His life on the cross for our sins. And just as the Ark carried the manna with which God had fed Israel in the desert, Mary carries in her womb the child who will be known as “the Bread of Life.” So if Mary is the new Ark and the dwelling place of God on earth, then by implication JESUS is God on earth. You see, all Marian doctrines point to Christ and who He really is.  Now in the reading from the Apocalypse, if Mary is that Ark, that Ark is clearly described as being in Heaven. (11:19). And this new Ark is not just Mary’s soul but also her body. It was in Mary’s body  that “the Word became flesh and dwelt among us” (John 1:14) and so it is fitting that her body, the true Ark be taken up into the Holy of Holies in Heaven.

Now why should all this matter to us? Well, just as with most Marian dogmas, it’s an anticipation of what we hope for ourselves. As Mary was assumed body and soul into Heaven, we hope that one day we too will be there body and soul. When we die, once our souls are purified they will enter Heaven, but the body remains in the tomb and decays. But on the Last Day, as St Paul tells us in First Corinthians, the trumpet shall sound and all the dead shall be raised, and what was perishable will be imperishable, incorruptible. In other words we will be reunited with our bodies for ever. And then will come to pass the saying “Death is swallowed up in victory.” “O death, where is thy victory? O death, where is thy sting?” But thanks be to God, who gives us the victory through our Lord JESUS Christ” (1 Corinthians 15:51-57).

The Assumption of Our Lady then is a wonderful precursor of our own resurrection. It is made possible by Christ’s rising from the dead. As we are told in the Second Reading, “Death came through one man (Adam), in the same way the resurrection of the dead has come through one man” (Christ). (1 Corinthians 15:21).

Our Lady is the first fruit of the Redemption and already shares in it. She is the first fulfilment of the promises of Our Lord; and she is for us, the foreshadowing of what will happen to us. She shows us the way and opens the way for all who wish to follow her Son. So let us rejoice on this Feast of all Marian Feasts. We rejoice with Pope Pius XII, and the whole Court of Heaven, and we pray to our Heavenly Mother in all her glory that where she has gone before we may follow. “Holy Mary, Mother of God, pray for us sinners now and at the hour of our death. Amen.” 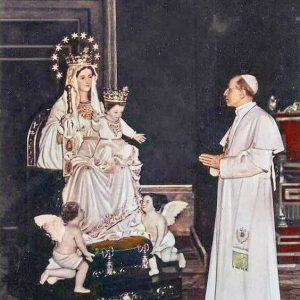 Pope Pius XII before a statue of Our Lady. “Sancta Maria, Mater Dei, ora pro nobis peccatoribus, nunc et in hora mortis nostrae.” “Holy Mary, Mother of God, pray for us sinners, now and at the hour of our death. Amen.”