I wish you a happy Easter Octave. The Octave means we celebrate the whole of this week as if it were Easter Sunday. Easter Sunday is stretched out over eight days to give us more time to meditate on the most important event in human history – the Resurrection of JESUS from the dead. 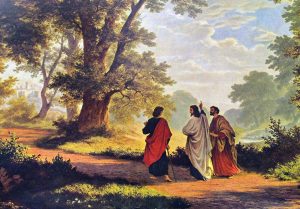 In today’s Gospel we have Luke’s account of one of my favourite stories in the Bible, when JESUS meets the two disciples on the road to Emmaus on Easter Sunday evening (Luke 24:13-35). By this time Our Lord had already appeared to the holy women and to Mary Magdalene who had informed Peter and the other disciples that He is risen. While John believes, the others are at first dismissive. And this is the context of this Gospel.

The two disciples, Cleopas and another whose name we are not told, are walking towards Emmaus which was a short distance from Jerusalem, and they are discussing the happenings of the past few days. JESUS appears to them and asks them why they are sad. At this point they don’t recognise Him. He is hidden from them in some mysterious way. St Thomas Aquinas says this is because they had lost their faith. But they were disoriented, and it’s interesting they were walking away from Jerusalem the Holy City, away from the light and into the darkness. They explain they had “hoped” (past tense) that JESUS would be the one who would set Israel free, but now all seemed to be lost. They refer to Him as a ‘prophet’, but they don’t call Him “Messiah”. The Passion and Crucifixion of Our Lord was indeed a terrible thing, and it had, it seems, caused them to lose their faith in Him. As St Paul, writing some years later said: the Crucifixion was “a stumbling block to the Jews and foolishness to the Gentiles” (1 Corinthians 1: 23). But surely they must have heard Our Lord say many times He would be crucified and after three days rise again? But this just didn’t fit with their idea of the Messiah. Yes, for them they would have loved the Messiah to have been a great reformer who would deliver them from the Romans – but the “foolishness of the cross” – that they just couldn’t handle. So they refused to believe what the women had told them.

Then Our Lord says to them, “You foolish men! So slow to believe the full message of the prophets!” He accuses them of being foolish perhaps because they had never taken the trouble to read the prophets and see what they had said about the Messiah, and that He would be “led like a lamb to the slaughter” (Isaiah 53:7). The mission of the Messiah was a supernatural one to save the whole of mankind. And then He showed them how in the Scriptures all the types and figures of the Old Testament were a pre-figuring of Him. He must have explained how in the book of Genesis it was foretold that the seed of the woman would crush the serpent’s head. He must also have told them how when Moses lifted up the serpent of brass in the desert and those who looked upon it were healed of the poison, how this was all a pre-figuring of the Cross and our being healed of the poison of sin. He would also have spoken of how Isaiah had prophesied that the Suffering Messiah would be “Emmanuel”, God with us. All this and more He must have explained to them as they walked. And yet they still didn’t recognise Him.

Then they arrived at Emmaus, and JESUS made as if to go on, but they invited Him to stay with them. Then, when they had sat down at table, “He took bread and said the blessing, broke and gave it to them.” Notice the parallel here to the institution of the Holy Eucharist at the Last Supper. It was at this point their eyes were opened and they knew Him, but then He vanished from their sight. And they said, “Did not our hearts burn within us as He talked to us on the road and explained the Scriptures to us?”  And they both immediately turned and went back to Jerusalem to tell the other disciples what had happened. 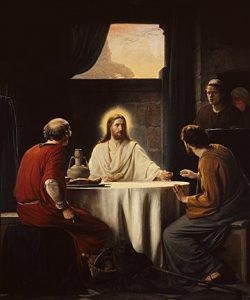 So it was not until Our Lord sat down with them and repeated the actions of the Last Supper that the veil was lifted from their eyes. And then as soon as they recognised Him He vanished. The reason? He was pointing them to the way He would be present to them from now on. After the Ascension Our Lord would no longer be present to them as a man but under the appearance of bread and wine. And He is also showing them that the Holy Eucharist is His crucified and risen body which is not bound by time and space or even appearance. The normal way JESUS appears to us now is under the veil of the Holy Eucharist. That is why they went away rejoicing in “how they had recognised Him in the breaking of bread.”

As they arrived at the village of Emmaus, the two disciples asked JESUS to stay with them. And so in every Mass He answers that prayer saying to them and to us, “Behold I am with you all days, even to the consummation of the world” (Matthew 28:20).

Most of us are unable to receive Him in Holy Communion at the moment, but we can invite Him now into our hearts and into our homes. Invite Our Lord now to come deeper and deeper into your heart and to stay there with you – always. 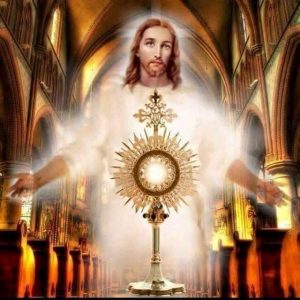