We are now half way through the month of November during which we pray in earnest for the Holy Souls in Purgatory. We should pray for the Holy Souls always, but during November we intensify our efforts. Sadly, the idea of Purgatory has been thrown on the scrap heap these past few decades. Many never speak of this truth, and nowadays some even step back in horror at the mere mention of it. This is probably because the doctrine is not properly understood, and as a result the Holy Souls suffer because fewer people pray for them. However, the reality of Purgatory is a divinely revealed truth which is also contained in Sacred Scripture. I offer this week’s letter in the hope that it will inspire more people to pray for the Holy Souls.

The Catechism of the Catholic Church (CCC) teaches, “All who die in God’s grace, but still imperfectly purified, are indeed assured of their eternal salvation; but after death they undergo purification, so as to achieve the holiness necessary to enter the joy of Heaven… The Church gives the name Purgatory to this final purification of the elect, which is entirely different from the punishment of the damned.” (#1030-1031).

The final book of the Bible, the Apocalypse or Revelation states clearly that nothing defiled will come into the presence of God and see Him face to face (21:27). There can be nothing impure or imperfect in Heaven. Now suppose there were no Purgatory. God’s justice would be too terrible for words. What about those who are not as pure as they should be? Maybe they haven’t reached the perfection God had desired for them. Could any of us say that at the end of our earthly life we would be so pure and holy that we could stand before the most holy and immaculate God? I know I couldn’t! The point is that if we deny Purgatory, we send the vast majority of the human race to Hell. Without Purgatory, those with the slightest imperfections would have to be rejected by God. Haven’t we all done silly things, an uncharitable deed, engaged in idle talk? We may have had our sins forgiven, but have we paid the debt of sin in this life? Are the remnants of those sins still on our souls? Nothing impure can enter Heaven. Purgatory then is merciful. It is where God’s love tempers His justice. As I have often pointed out, even St Padre Pio thought that he would pass through Purgatory.

We call the souls in Purgatory the “Holy Souls” because they died with grace in their souls. This means they died as friends of God, but they still require some purification because every single sin and fault has to be expiated (Matthew 5:26). They are also referred to as “Poor Souls” because they can no longer help themselves get to Heaven. This is because we have to work out our salvation on earth in our bodies, because human beings are both body and spirit. So when the soul leaves the body at death, we can no longer merit. Therefore, the Holy Souls, the Poor Souls need outside help, and that’s where we come in (2 Maccabees 12:46). They depend on our prayers, the Indulgences we gain for them and the Masses we have said for them. And we should be helping them out because they are our brothers and sisters in Christ, and together we all make up the Communion of Saints. They are our family members. 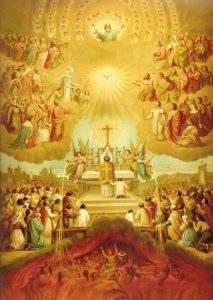 The Communion of Saints: the Church Triumphant (in Heaven), the Church Militant (us on earth)
and the Church Suffering (the Holy Souls in Purgatory)

The CCC continues, “The Church also commends almsgiving, indulgences, and works of penance undertaken on behalf of the dead: Let us help and commemorate them. If Job’s sons were purified by their father’s sacrifice, why would we doubt that our offerings for the dead bring them some consolation? Let us not hesitate to help those who have died and to offer our prayers for them” (#1032).

It is certain that the Souls in Purgatory are happy because their stay there is temporary and they know they are saved. Everyone in Purgatory will get to Heaven, but at the same time there is suffering because we have to pay back to God what we owe. St Catherine of Genoa (1447-1510) says that although Purgatory is painful because we see all the horror of our own sins, it is incomparably joyful because God is with us there and we are learning to endure His truth and His light. 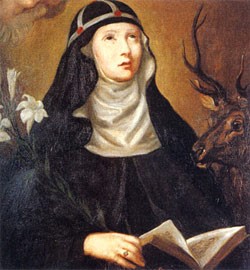 St Catherine of Genoa wrote a “Treatise on Purgatory”

Many private revelations reveal how the suffering of the souls in Purgatory can be relieved by us. I would like to relate a story from the book “Hungry Souls” by Gerard van den Aardweg first published in 2009. This is the story of a Bohemian widow who saw the dead. The souls asked her to tell her Parish Priest, Fr Hermann Wagner about these visits so as he would promote devotion to the souls in Purgatory. He was the only one who knew about the visits. Ruth (not her real name) was a quiet, rather pious lady in her fifties who did a lot of good. Her husband had died eight years before and her son had been killed during the German invasion of Poland in 1939.

One evening Ruth heard a voice which sounded like her husband’s but she wasn’t sure. She knelt down and prayed the Rosary for the Holy Souls and for her husband in particular because he had been rather impatient during his illness and had reproached God for it. She also took Holy Water and sprinkled it for him saying, “O Lord, give him eternal rest.” Then she saw her husband and he said quietly, “Don’t be afraid Ruth. It’s me. I’ve come to ask your help. Pray three Rosaries each day, and don’t tell anybody because they wouldn’t speak well of it.” Then he disappeared. But every day she prayed the three Rosaries asking God to forgive him for impatience during his suffering. After some weeks he appeared to her again, this time looking well and beautiful. “How are you Jacob?” she asked. “I’m fine. I may come home soon. I thank you Ruth. Thank you very much.” She wanted to embrace him but he declined saying, “Later Ruth. One day it will be wonderful. But I am allowed to tell you only one thing: others also want to come to you. God has given them permission. You can help them. Don’t reject them and never be afraid.” He vanished and she never saw him again. She assumed he must now be in Heaven. 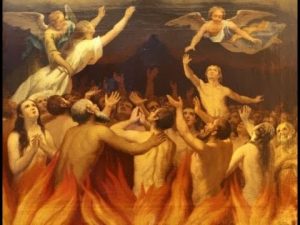 Souls in Purgatory being delivered by the angels

No souls appeared to her for quite some time and her only son Jacob was killed on the battlefield in Poland. She continued to pray very hard for the Holy Souls and she would ask them how it was with her son Jacob. Then one afternoon, rather unexpectedly an old woman appeared. She was quite wrinkled and Ruth thought her quite frightening. At first she didn’t think she was a Poor Soul. On taking a closer look she thought if she weren’t so ugly it might be her grandmother who had died long ago. A little uncertain she asked, “Who are you? Do I know you?” The old woman replied, “You do know who I am. I am your Grandma Joanna.” Ruth asked what she could do for her to which she responded, “You can do a lot for me. Pray every day a Rosary especially for me and be really good to the poor, particularly when someone needs help.” Then she vanished. Ruth then remembered how her grandmother was very hard on others and had often scolded people. She hadn’t been very good at praying either. So Ruth prayed a Rosary for her everyday and although it wasn’t always easy she went every day to the church to pray for her too. She didn’t want to say no to such a request for help.

A few months later her grandmother appeared to her again, this time looking not nearly so wrinkled and she even smiled. “I thank you Ruth, you have helped me very much. At first my way up was so long and full of stones that I almost despaired. Now it is not so far anymore. I thank you Ruth.” She kept smiling and then said, “Don’t worry about your son Jacob. He is already in Heaven. He was lying all night in a crater severely wounded, but he called upon JESUS and put his wounds in His wounds. That way he died. His death was a death of sacrifice united with that of JESUS. And so his guardian angel took him straight up. Dying is beautiful if you love JESUS.”

Ruth thanked her grandmother for telling her all this and then Grandmother Joanna told her she would not be coming any more but others would. Many more did come and Ruth prayed and sacrificed for them and she released them from Purgatory. Some poor souls told Ruth they are often around their living family members and friends for years but receive no help. Ruth wrote down their complaints:

“You in the world have no inkling of what we have to suffer. Being abandoned and forgotten by those who have been nearest to us in the world: that is most bitter. Sometimes they stand at the tombs of our decayed bodies and don’t pray for us at all. They act as if we don’t exist anymore. God’s justice commands us to be silent. But we stand at the door of their houses, of our former dwellings, and wait. We stand there and wait, days, years. We wait for them to give us a small sign of their love by prayer and sacrifices. But we stay there in vain. Tell them through the priest: Love should not die at death. We are still alive and we are hungry for love. For your love!”

I find this a really moving story. The Holy Souls need our help. Don’t be deaf to their pleas. See the newsletter for the Indulgences you can gain for the Holy Souls by visiting a cemetery during the whole month of November. Pray the Rosary for them. Have Masses offered for them. Perform acts of charity on their behalf. In the words of St Padre Pio, “Let us empty Purgatory.” And remember, we are members of the Communion of Saints! 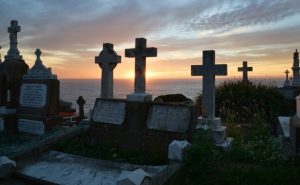 Eternal rest grant unto them, O Lord, and let perpetual light shine upon them.
May they rest in peace. Amen.