Today is the transferred Solemnity of SS Peter and Paul. I say transferred because the real date of the Feast is 29th June (Monday), and in normal times it would be a Holyday of Obligation. The current practice in England and Wales when a Day of Obligation falls on a Saturday or Monday is to transfer it to the Sunday.

I have written a little about SS Peter and Paul in this week’s newsletter. St Peter was the first Pope and Paul is the Apostle to the Gentiles and both were martyred in Rome around 67 AD. With these two martyrs being the foundation of the Church, I thought it might be appropriate to say a little bit about the charism of infallibility in the Church, what we mean by this, and how we can be certain the Church is giving us the truth.

Infallibility means exemption from error. This is a negative in the sense it preserves from error, but it is also something positive because it implies not only the impossibility of being in error, but it also means possessing and proclaiming the truth. Infallibility is necessary in the Church so as we can know the truths Christ gave us with certainty. If Our Lord said, “He that believeth and is baptised, shall be saved: but he that believeth not shall be condemned” (Mark 16:16), He must have given us the means to know the truth, and that means is the Catholic Church. The ‘Depositum fidei’ or the ‘Deposit of Faith’ is the Church’s possession of unchangeable truth: what God has revealed through His prophets in the Old Law, and through Our Lord JESUS Christ in the New Law. When Our Lord commanded the Apostles to go out and preach the Gospel to all nations, He promised to be with them “all days even to the consummation of the world” (Matthew 28:20).  And at the Last Supper He said, “I will pray the Father, and He will give you another Paraclete to be with you forever…the Spirit of truth… He dwells with you and will be in you…The Holy Spirit whom the Father will send in My name, He will teach you all things, and bring to your remembrance all that I have said to you” (John 14:16-17,26). And then, “When the Spirit of truth comes, He will guide you into all truth” (John 16:13). So it is the Holy Spirit that is the principle source of the Church’s infallibility and thus She will be protected from error both in belief and in teaching, and it is to the Catholic Church alone that Christ made these promises. As I mentioned in my letter for Pentecost Sunday, the Apostles prior to the coming of the Holy Spirit at Pentecost were rather confused about what Our Lord taught. But when the Holy Spirit came upon them they understood perfectly everything He had taught them and they all enjoyed the charism of infallibility in their teaching when they spoke officially as Apostles and Teachers of the Faith. This wasn’t for their benefit, but for ours. And this teaching, the Deposit of Faith, is handed on to us through the Magisterium (teaching authority) of the Church by the Pope and the Bishops.

So when as Catholics the Church gives us a solemn judgement on something we should assent to it, because it is irreformable and is guaranteed by Christ. The various Creeds we say, such as the Apostle’s Creed or the Nicene Creed which we say on a Sunday at Mass are all infallible because they are part of the Deposit of Faith. These teachings are irreformable, and they are also important so that we know what we believe.

Those of you old enough to have learned the old ‘Penny Catechism’ will know that, “The Pope is infallible when he defines a doctrine concerning faith or morals to be held by the whole Church.” A good modern example of an infallible teaching would be Pope Pius XII proclaiming the dogma of the Assumption of Our Lady in 1950. He said the following: 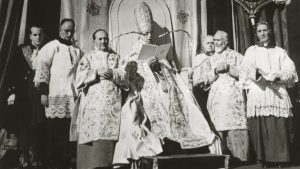 Venerable Pope Pius XII defining the dogma of the Assumption of Our Lady in St Peter’s Square, 1950.

That’s how it’s done! But this was no new doctrine. It has always been believed by the Church and the Feast of the Assumption has existed since the fifth century. The Pope simply clarified it. The Pope can never invent a new doctrine. He is the guardian of the Deposit of Faith and is bound by it and by the teaching of all his predecessors. Infallibility protects the Church, as well as the authority of Scripture and Tradition by ensuring that the Pope is prevented from misusing them and thereby formally teaching error.

The Pope, when he makes an infallible pronouncement must fulfil the conditions laid down by the First Vatican Council (1868-1870). People can often get this wrong thinking that everything a Pope says is infallible. Or the other extreme is to say that if he teaches something erroneous he ceases to be the Pope. Both are wrong! This is not how the Church sees it. So the conditions for a Pope speaking infallibly are as follows:

All these conditions must exist for a Pope to proclaim something infallibly. Not everything taught by the Magisterium has the guarantee of infallibility. It would be heretical to say that everything a Pope says is infallible. Popes have made errors in their teachings in the past, but they did not fulfil the above mentioned conditions of infallibility. A famous example is when Pope John XXII (ca 1244-1334) taught the heresy that those who die do not see the Beatific Vision (see God face to face) until the Last Judgement. He later recanted. And it was left to his successor, Benedict XII to correct his wrong teaching.

Bishops when they solemnly define something in a Council are infallible when they do so in union with the Pope. For example, the dogmatic decrees of the Council of Trent (1545-63) which was the Church’s answer to the Protestant Reformation, and the First Vatican Council (1868-1870) are infallible and cannot be changed because they proclaimed dogmatic truths to be held definitively by the whole Church and were all approved by the Pope of the day.

However, contrary to what many think, the Second Vatican Council was not an infallible Council. Why not? Because both Pope St John XXIII who opened it and Pope St Paul VI who closed it said so. Paul VI said towards the end of the Second Vatican Council in 1964 that “given the Council’s pastoral character, it avoided pronouncing, in an extraordinary manner, dogmas endowed with the note of infallibility.” In other words infallibility was not used at Vatican II because it was a pastoral Council – not a dogmatic one. No doctrine was defined there. But that said, there are many teachings in the documents of Vatican II which are infallible because it incorporates infallible teachings from the past. 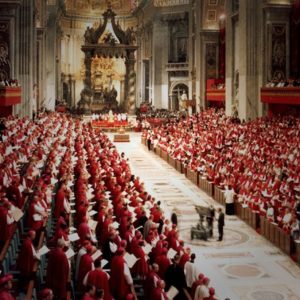 The Bishops of the world at the Second Vatican Council, 1962-65.

Ordinary Magisterial teaching when it is taught by all the Bishops of the world also constitutes an infallible source of what the Church teaches. This was implied when Pope St John Paul II in the 1994 document ‘Ordinatio Sacerdotalis’ reaffirmed the teaching of the male only priesthood. The Pope didn’t here use his extraordinary powers of infallibility, but instead laid down that this had always been taught by all and therefore was infallible by virtue of it being an ordinary Magisterial teaching and “that this judgment is to be definitively held by all the Church’s faithful.” The infallible nature of this was later confirmed by Cardinal Ratzinger (later Benedict XVI) when he was head of the Congregation for the Doctrine of the Faith and has been reaffirmed by Pope Francis. But not all ordinary Magisterial teachings are infallible. Only those which have been taught consistently by all the Bishops throughout the world.

Another source of infallibility which might surprise you is the ‘sensus fidelium’ or the faith of the Catholic people. This means that the Catholic faithful can be a source of infallibility when there is a distinct universal and constant profession of a doctrine by the whole body of the faithful, and it must be believed without ambiguity. Pope Benedict XVI referred to it as a “supernatural instinct” for knowing what teachings ring with Catholic truth.  This basically means that the Holy Spirit would not allow the whole of the Church faithful to hold to some doctrine when it is false or heretical. In recent years there have been abuses of this doctrine when people want to dissent from Church teaching. However, the Second Vatican Council taught that this Catholic instinct is “exercised under the guidance of the sacred teaching authority” to which the people of God show “faithful and respectful obedience” (Lumen gentium, 12).

This is a very complicated topic and I’ve only touched the surface of some of the main points. Books can be written on this and indeed many have been! But two thousand years ago, Truth Itself came to this earth and spoke through a physical human body like ours. That Truth is now living on the earth today and speaking to us through His Mystical Body – the Catholic Church. This is why we must be obedient to the Deposit of Faith because it is Christ speaking to us. When the Church formally condemns an error, it is Christ condemning it. When the Successor of Peter infallibly defines a doctrine, it is Christ telling us this is true. “He that hears you hears Me” (Luke 10:16). This is why there can be no changing of eternal truths to please the world. We must be like the salt of the earth to save souls (Matthew 5:13).

I will conclude with the words of the great Venerable Archbishop Fulton Sheen (1895-1979):

“Some there are who hate Truth and nail Him to a cross; some there are who half believe in Truth like Pilate, who turned his back upon Him; some there are who love Truth like Peter, and die like the Master died. And from that day to this – it is Divine Truth that makes the difference. It is the Divine Truth that makes the Church the stumbling-block of the sceptics, the scandal of the half-hearted, the reproach of the ignorant. But no one escapes Her, for they realise She stands in a drab civilisation as the only rock of security and Truth.”

Happy Feast and may God bless you all. 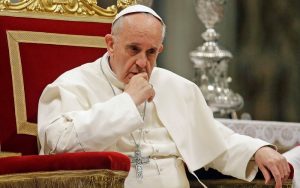