You have probably heard in the news how in some cities in America mobs are pulling down a number of statues. Should controversial statues be removed? Well, that’s not for me to say. That is something to be decided by local communities after discussion and debate, but it should not be the action of a mob. Statues of the saints have also been pulled down and desecrated. Last week a mob of two hundred gathered in the city of St Louis to pull down a statue of St Louis (1214-1270), the great monarch of France. King Louis was a really holy king. He led two Crusades and cared for his people so much that he personally ministered to lepers. He heard Mass twice, sometimes three times a day and established numerous hospitals. Each day he would have thirteen special guests from among the poor to eat with him, and a large number of poor were served meals near his palace. During Advent and Lent, all who presented themselves were given a meal, and Louis often served them in person. The people pulling down his statue were totally ignorant of all this and who he was. But a young diocesan priest, Fr Stephen Schumacher, ordained only a year ago, wearing his cassock, stood there peacefully in front of this mob and defended the statue of St Louis and explained to the mob the reality of who St Louis was. What a wonderful example for us, particularly us priests. 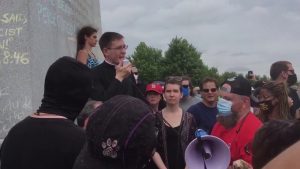 And the statue was saved as a result of his action and the mob went away. But someone in the crowd did say to him they would also come after the statue of St Louis in the Cathedral too. Could the same desecration of statues happen here? I don’t know, but it’s always a possibility as it has happened before at the time of the Reformation, and so we have to be ready to defend them.

To tear down and destroy sacred images is an act of sacrilege and blasphemy and is the work of the devil. We are well known as Catholics for having statues or pictures of Our Lord, Our Lady and of the saints in our churches and in our homes, and we often come under criticism for it from non-Catholics and non-Christians. Historically it could be argued that dark moments for the Church are always preceded by ‘iconoclasm’. Iconoclasm literally means ‘image breaking’ and this has happened many times throughout history when statues and sacred images have been destroyed.

In the early Church and during the persecution when Mass had to be celebrated in hiding in the catacombs or in private houses, they couldn’t publicly worship God or have signs or symbols like crosses or statues until the Emperor Constantine (232-337), as he was marching with his army saw an image of the Cross in the sky and with it the words, “In hoc signo vinces.” That is, “In this sign you shall conquer.” 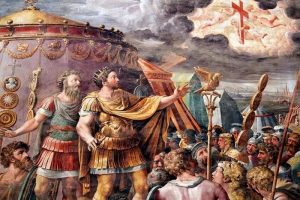 Constantine sees the sign of the Cross in the sky

At first Constantine did not understand the meaning until the following night when he had a dream in which Christ explained to him that he should use the sign or the image of the Cross against his enemies. So Constantine put the Cross on His standard and shields.  He was victorious at the Battle of the Milvian Bridge in 312 and went on from there to conquer all of the Roman Empire, east and west. This was the beginning of Christendom, and Constantine eventually became a Christian himself when he was baptised shortly before his death.

So why do non-Catholics object to our use of statues, images and crucifixes? Over the past few years I have been asked about this by a number of our University students as it is often a point of argument with their non-Catholic friends. They object on the grounds that it violates the apparent Biblical prohibition against images in Exodus 20:3-6.

“You shall have no other gods before Me. You shall not make for yourself a graven image, or any likeness of anything that is in heaven above, or that is in the earth beneath, or that is in the water under the earth;  you shall not bow down to them or serve them; for I the Lord your God am a jealous God, visiting the iniquity of the fathers upon the children to the third and the fourth generation of those who hate Me, but showing steadfast love to thousands of those who love Me and keep My commandments.”

So how do we deal with this? The first thing to notice is that it is the worship of images that is forbidden by God. To worship anything other than the one true God is idolatry and the Israelites were prone to this. Remember the story of the golden calf (Exodus 32)? But this commandment does not prohibit the making of statues and images. For example, don’t we all have pictures of loved ones on our mantelpieces or in our wallets? Certainly in the case of deceased relatives and friends they represent people who are no longer physically present to us. But no one complains about that.

Continuing then, does Exodus 20 prohibit the making of religious images? Well it doesn’t elsewhere in Scripture. In fact, God even commands it! There are the angels on the Ark of the Covenant (Exodus 25: 18-19) as well as the bronze serpent in the desert. “The Lord said to Moses, ‘Make a fiery serpent, and set it on a pole; and every one who is bitten, when he sees it, shall live.’  So Moses made a bronze serpent, and set it on a pole; and if a serpent bit any man, he would look at the bronze serpent and live” (Numbers 21:8-9). This prefigures the crucifix as you can see in the picture below. 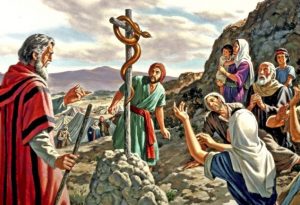 Moses and the brass serpent

King Solomon had statues and images made to adorn the Temple, and perhaps the most striking thing about this is that he did it after God had given him the gift of wisdom (1 Kings 6: 23, 27-29). The point is these carved statues and images were not intended for any idolatrous purpose. And in fact, God approved of them.

“When Solomon had finished building the house of the Lord and the king’s house and all that Solomon desired to build, the Lord appeared to Solomon a second time, as he had appeared to him at Gibeon.  And the Lord said to him, ‘I have heard your prayer and your supplication, which you have made before Me; I have consecrated this house which you have built, and put My name there for ever; My eyes and My heart will be there for all time’” (1 Kings 9:1-3).

But regarding images of God Himself, Christ in the Incarnation is the icon of the Father. In the Old Testament there was no visible representation of God. God is a spirit and invisible, so there was no way to make a statue or an icon of God. But with Our Lord, in the Incarnation, “the Word became flesh” (John 1:14). God the Son became a human being, so you could see Him and touch Him. If cameras has existed then you would have taken able to take a photograph of Him. What was invisible became visible. And so images took on a new significance and so now we can have images of God. After all, JESUS said, “He who has seen Me has seen the Father” (John 14:9). Similarly in the traditional Latin Mass, the priest as he says the Our Father is instructed to look at the consecrated Host, because “The Father and I are one” (John 10:30).

Furthermore we use images to teach the Faith. We have Bible scenes in our churches as paintings or in stain-glass windows. In St Mary’s we have so many saints depicted – Our Lady, St Joseph, St Peter, St Mary Magdalene, St George, St Anthony of Padua, St Thérèse of Lisieux, St Padre Pio and many others. We can tell our children about them to inspire them to lives of virtue and love of God. These images can be an aid to devotion but we do not worship them because that would be against the First Commandment. Divine worship or ‘latria’ is given to God alone; that is to the Father, the Son and the Holy Spirit. The Holy Eucharist is truly JESUS Christ and so we give Him divine worship (latria) there too. To the saints we give a lesser form of veneration (dulia) and to Our Lady, being the most perfect of all God’s creatures we give ‘’hyperdulia’ which is substantially less than the latria we give to God but greater than that which we give to the other saints.

So this is a bit of Catholic theology on images and why we have them. I urge you all to have at least one blessed crucifix in your homes as well as one or two blessed statues or pictures of the saints. It is important to have them blessed. Demons hate sacred images in your homes. Today we underestimate the spiritual power of these sacred things. They give us spiritual protection when we use them with faith.

ST MARY’S WILL BE OPEN FOR PRIVATE PRAYER AT THE FOLLOWING TIMES: