Today, in the traditional calendar is the Feast of St Stanislaus, Patron Saint of Poland. According to Wikipedia the Feast is kept in Poland tomorrow. Either way I wish all our Polish parishioners a very happy Feast and may St Stanislaus continue to protect Poland from secularism and help us all stand up for the truth of Christ.

In this month of May, Our Lady’s month, I would like to relate a beautiful and very fascinating story about a man named Claude Newman concerning Our Lady and the Miraculous Medal. I’m assuming people know about the Miraculous Medal because it is very famous and I’ve also written about it in the past. But originally called the Medal of the Immaculate Conception it quickly became known as the Miraculous Medal on account of the many miracles it worked. And the greatest miracle, of course, is the saving of a soul, and there are thousands of stories out there as to how Our Lady has intervened through the Miraculous Medal. 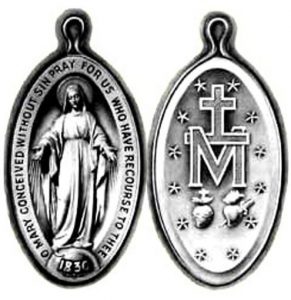 Claude Newman was an African-American, and in 1942 he shot and killed a man he caught abusing his grandmother. He was arrested, convicted and put on death row. While he was waiting for his sentence to be carried out he was sharing a cell block with four other prisoners. One of those prisoners, a Catholic, was wearing a Miraculous Medal around his neck and Claude asked him what it was. The prisoner didn’t know, but Claude was very persistent in his questions, so the man became angry, suddenly took the medal off from around his own neck and threw it on the floor at Claude’s feet telling him to “take the thing”. Claude picked up the medal and rather liked it and put it around his own neck, although he had no idea whose image was on it. To him it was simply a trinket, but for some reason he felt really attracted to it and wanted to wear it.

During the night while he was sleeping, he was woken up by a tap on the wrist. Claude later told the priest Fr O’Leary, “She was the most beautiful woman God ever created.” The Lady said to him, “If you would like me to be your Mother, and you would like to be my child, send for a priest of the Catholic Church.” And after saying these words she suddenly disappeared.

Claude immediately started to shout out, “a ghost, a ghost”, and began screaming that he wanted a Catholic priest. So when Fr O’Leary came the next morning and had everything explained to him, according to his testimony, all five of the prisoners asked to receive instruction in the Catholic faith. When the priest returned later to begin the instruction he discovered that Claude could neither read nor write. Claude told him that he had never been to school, and Father O’Leary soon discovered that his ignorance of religion was even greater. He knew a God existed but he knew absolutely nothing of JESUS or of Christianity.

Some days later, two religious sisters from Father O’Leary’s parish obtained permission to come to the prison. They had heard about Claude and wanted to meet him and hear his story. They also wanted to visit the women in the prison. Very quickly the sisters began to teach some of the women prisoners the catechism as well. Fr O’Leary taught the men, and when the time came for the instruction on Confession, Claude said, “Oh, I know about that! The Lady told me that when we go to confession we are kneeling down not before a priest, but we’re kneeling down by the Cross of her Son. And that when we are truly sorry for our sins, and we confess our sins, the Blood He shed flows down over us and washes away all our sins.” The priest and the sisters were stunned. Fr O’Leary initially had trouble believing Claude’s story and so Claude asked to speak to him privately. “She told me that if you doubted me or
showed hesitancy, I was to remind you that lying in a ditch in Holland in 1940, you made a vow to her which she’s still waiting for you to keep.”

And, Father O’Leary recalls, “Claude then told me precisely what the vow was.” The vow was that if he got out of the war alive he would build a church in honour of the Immaculate Conception. This did happen in 1947. This convinced the priest he was telling the truth since nobody else could know about it. Claude would also tell his classmates, “You should not be afraid of confession. You’re really telling God your sins, not the priest. You know, the Lady said that confession is something like a telephone. We talk through the priest to God, and God talks back to us through the priest.” 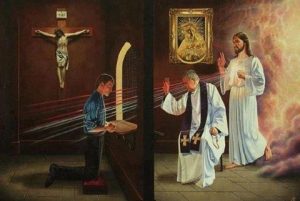 On the Holy Eucharist Claude said, “The Lady told me that in Communion, I will only see what looks like a piece of bread. But she told me that It is really and truly her Son, and that He will be with me just as He was with her before He was born in Bethlehem. She told me that I should spend my time like she did during her lifetime with Him, in loving Him, adoring Him, thanking Him, praising Him, and asking Him for blessings.”

Eventually they finished the instructions and Fr O’Leary baptised Claude into the Faith with one of the sisters acting as his godparent. His day of execution was set and Claude was asked what his last request was. To everyone’s astonishment he said he wanted to have a party to celebrate! “I’m not going to die; only this body. I’m going to be with her.” Since a wealthy patron of the parish had agreed to provide everything for the party the request was granted. After the party, at Claude’s request, they made a Holy Hour, praying especially for him and for all of them, and they also made the Stations of the Cross. A few minutes before the execution Fr O’Leary brought him Holy Communion, when suddenly the Sheriff came running and shouting, “Reprieve, Reprieve, the Governor has given a two-week reprieve!” Claude was very disappointed by the delay and weeping asked the priest why must he stay here for another two weeks. He wanted to go to Heaven.

The priest suddenly had an inspiration. There was another white prisoner James Hughs, who at eighteen had abandoned his Catholic faith due to his immoral life. James hated Claude intensely and even more so when he heard he had got a reprieve. James blasphemed God and he was also due to be executed for murder. Fr O’Leary suggested “Maybe Our Blessed Mother wants you to offer this denial of being with her for his conversion. So why don’t you offer to God every moment that you are separated from her for this prisoner, so that he will not be separated from God for all eternity.” Claude agreed. He and Fr O’Leary were the only two people who knew about this.  During the two week reprieve, Claude offered his sacrifice and prayers for James Hughs’ conversion. Two weeks later, Claude was finally put to death by the electric chair on 4th February 1944. Father O’Leary said of his death, “I’ve never seen anyone go to his death as joyfully and happily. Even the official witnesses and the newspaper reporters were amazed. They said they couldn’t understand how anyone could go and sit in the electric chair while at the same time actually beaming with happiness.” His final words to Fr O’Leary were “Father, I will remember you. And whenever you have a request, ask me, and I will ask her.”

Three months later when the time came for James Hughs to be executed, he violently refused all spiritual assistance, cursing and blaspheming even as he sat on the electric chair. He was asked if he had a last word. Suddenly, looking to a corner of the room, he screamed in terror, “Get me a priest!” Fr O’Leary who was already in the room heard the man’s confession. He repented of all his sins and showed great sorrow for his evil deeds. Everyone wanted to know from the priest what made James Hughs change his mind, but he hadn’t asked him. So the Sheriff went and asked him himself. James explained that he had seen Claude and the Blessed Virgin behind him, her hands on his shoulders. Then, Claude had obtained from Our Lady that he, James, have a glimpse of his final destination if he refused to repent. That’s when, filled with horror, he demanded a priest.

So Fr O’Leary, with Our Lady’s help, taught Claude to offer his sufferings for the salvation of others. Claude’s sufferings helped to pay the price for James’ last minute conversion. Therefore we should never underestimate the value of our sufferings, whatever it might be when it is joined to the sufferings of Our Lord and Our Lady’s intercession.

Neither Claude or James had done anything to merit salvation. Claude knew absolutely nothing about God, and while James who was Catholic should have known, he had rejected God because of his lifestyle. But both of them were loved by Our Lady. She sought them out. She will do everything she can to help us get to Heaven. Claude didn’t even ask for it, but because he saw the Miraculous Medal, loved her image on it and placed it around his neck not even knowing what it was, she fulfilled her promise which was, “Those who wear this medal around their neck will receive great graces.” This story also echoes the message of Our Lady of Fatima in showing the importance of penance and sacrifice for sinners to save them. If anyone would like a blessed Miraculous Medal, please ask me.

“O Mary conceived without sin, pray for us who have recourse to thee.”

God bless you all,