A number of people asked if in the event of another lockdown I would resume writing a weekly letter. So here it is. We are told it will be only for a month.

The Cardinal and some of our Bishops and also the Archbishop of Canterbury have appealed to the Prime Minister that churches should remain open for public worship. They have argued that public worship is vital to the life of the country and also that our churches with the rigorous measures we have put in place are certainly among the cleanest and safest places to be. Of course, it is also our duty to worship God in public because Christ is King and Lord of all and the whole universe is subject to Him.

On Wednesday I celebrated the last public Mass at St Mary’s before lockdown and it happened to be the feast of St Charles Borromeo (1538-84) which seemed very apt because he was Archbishop of Milan during the plague of 1576-78. This epidemic became known as the “St Charles Plague” because of the heroic way he responded to it. 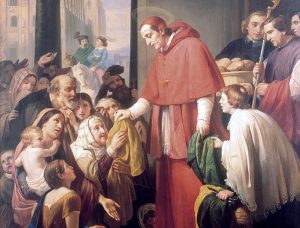 Charles was born into a noble family in Milan in 1538 and his uncle, Cardinal Medici, became Pope Pius IV who made him a Cardinal before he was even ordained a priest so as he could administer the diocese of Milan. To be made a Cardinal before ordination was quite common in those times. Charles was then ordained at the age of 25 and he quickly became Archbishop of Milan and played a major role in the Council of Trent, which was basically the Catholic Church’s answer to the Reformation. The Council upheld Catholic teaching and decreed various reforms which St Charles vigorously implemented in Milan, including the proper education of priests, the importance of caring for the poor and he insisted on far greater reverence during the Mass.

When the plague broke out in Milan in 1576 Charles was attending a funeral of a bishop elsewhere, but when he heard the news, instead of keeping away he immediately returned to his Cathedral in Milan and begged God for mercy. Then without further ado, he went to the centre of the outbreak. When he finally got home he found officials waiting for him asking him to take charge of the situation since all the city’s leaders had fled!

The authorities out of fear of contagion had already forbidden public processions and religious ceremonies, and so many souls were being deprived of the Sacraments. St Charles said that it was because of this that the wrath of God had been called down upon Milan. Therefore, he told the officials that the only cure was to pray and do penance with greater fervour than before.

Charles went out every day to visit the sick and dying and offered himself as a victim for the sins of his people. Although there were many priests in Milan, there were problems with their ministering to the dying, since many parishioners wouldn’t let their priests near them until the passage of time had shown they had remained healthy. Many priests in Milan went into hiding, fearing they might catch the disease. And so St Charles told them, “Do not be so forgetful of your priesthood as to prefer a late death to a holy one.”

He went to the monasteries and asked the priests there for help. Many responded positively and heroically served the sick. After the plague subsided, not one of Charles’ companions had died, whereas many of those who refused to help had. But he also advised his priests not to “neglect human means, such as preventatives, remedies, doctors, everything that you can use to keep off infection, for such means are in no way opposed to our doing our duty.” He also said, “From the beginning I resolved to place myself entirely in God’s hands, without however despising ordinary remedies.” He issued many guidelines telling the faithful not to gather in crowds and to avoid contact with each other. Masses were held outdoors if the church was too small and he ordered more Masses be celebrated. Catechism classes were held on street corners.

He told everyone to “take the plague of the soul into consideration more than the contagion of the body which, for many reasons, is less pernicious.” St Charles insisted on public prayer and penance. Ashes were constantly distributed. There were three processions a week during which he walked barefoot wearing a thick penitential cord around his neck.

St Charles set up nineteen columns throughout the city where public Masses were celebrated every morning. This allowed the sick to attend Mass every day and the priests would distribute Holy Communion to all the victims of the plague through their windows. He was concerned chiefly for the spiritual welfare of his flock. 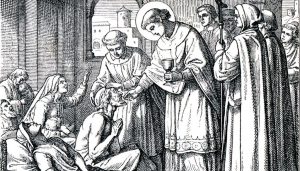 An engraving depicting St  Charles Borromeo ministering to the sick, circa 1880

By Christmas of 1577, the plague had become less widespread. Seventeen thousand people had died in Milan out of a population of one hundred and twenty thousand. However, in Venice which is a much smaller city, forty thousand people died in the same two years.  Why had Milan been spared from a greater loss?

According to St Charles, “Not by our prudence, which was caught asleep. Not by science of the doctors who could not discover the sources of the contagion, much less a cure. Not by the care of those in authority who abandoned the city. No, my dear children, but only by the mercy of God.”

St Charles died in 1584 at the young age of 46 having exhausted himself working in the vineyard of the Lord. His heart is preserved in the Basilica of San Carlo al Corso in Rome, which is cared for by the Rosminian Fathers. 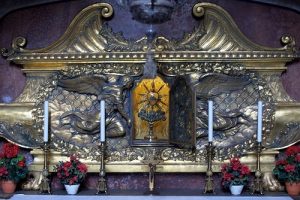 Cardinal Vincent Nichols said on Radio 4 last Thursday that he expected the Government will soon abandon its ban on public worship. I think he is working hard behind the scenes. Let us pray through the intercession of St Charles Borromeo that this will come about quickly.