St Mary’s is served by the Rosminians: 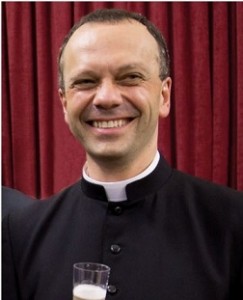 Father Paul joined the Rosminians in 2007. He was ordained in Bexhill (a former Rosminian parish) in July 2015 after studying in Rome and Dublin.

Father Paul has always had an interest in music. At 16 he ran the parish choir in Bexhill and after leaving school studied at the Royal Academy of Music, from where he gained a degree and a teaching diploma. Over the years he has taught singing and been a director or music. Needless to say he loves listening to music – he particularly likes Italian opera and 16th century church music.  His other interests include walking and cycling. 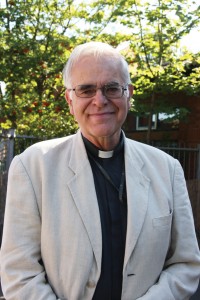 Father Simon was a visiting priest at St Mary’s for a number of years before becoming a resident in the parish in 2012.   He has been involved with the Disability Group since its beginning and has often gone to Lourdes with them.

When he was teaching at Grace Dieu he was a regular priest at St Aloysius, Hathern, especially during Canon McNicholas’ time.

Father Simon is a governor of De Lisle College and St Mary’s Primary School. He is very happy to visit parishioners especially if they are sick, but you need to arrange a date and maybe transport as he does not drive. 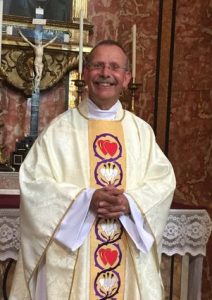 Father David has been ministering at St Mary’s since he was ordained a deacon in June 2017. He was ordained to the priesthood by the Most Reverend Bernard Longley, Archbishop of Birmingham at the Oratory of St Philip Neri (Birmingham) in June 2018.