It is sometimes said that apparitions are sermons from Heaven! For the past two hundred years in her various apparitions, Our Lady has been telling us of the importance of sacramentals. In 1830 in Paris, Our Lady gave St Catherine Labouré the Miraculous Medal. In 1858 at Lourdes, she stressed the importance of the Rosary to St Bernadette. In 1917 at Fatima she appeared at the final apparition as Our Lady of Mount Carmel in a Carmelite habit and stressed the importance of the Brown Scapular and again the Rosary. When she appeared to St Dominic in the twelfth century she said, “One day through the Rosary and the Scapular I will save the world.”

So what is a sacramental? A sacramental is not a sacrament. Sacraments are instituted by Christ to give us grace, and the outward visible sign in the Sacraments, whether it be bread and wine in the Holy Eucharist or water in Baptism, gives us the invisible grace. Now a sacramental is also an outward visible sign, but they are instituted by the Church. They have a spiritual effect caused by the prayers of the Church. Examples would be Holy Water, statues, Rosaries, medals, blessed candles and the Brown Scapular. 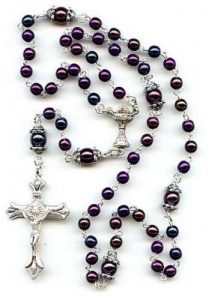 Rosary beads are a sacramental

Sacraments, so long as they are properly administered, grace is conferred on the person receiving it regardless of how holy or not the priest administering it might be. The most wicked priest in the world can validly transubstantiate the bread and wine into the Body, Blood, Soul and Divinity of Christ provided he uses the correct form. The holiness of the priest has no effect on the validity of the Sacrament. Similarly, if the person receiving Holy Communion doesn’t believe in the Real Presence, he or she is still receiving the Body, Blood, Soul and Divinity of Christ, although they would be committing a sacrilege. On the other hand, the graces received from a sacramental depend very much on the faith, the love of God and the disposition of the person using it. So if I have a weak faith, I won’t get as much out of the use of a sacramental as if I had a strong faith. A good example of this from the Bible would be when the woman who had had a haemorrhage for twelve years came up and touched the fringe of JESUS’ cloak and she was immediately healed. And Our Lord said to her, “Daughter, your faith has made you well; go in peace.” (Luke 8: 43-48). She was cured because she had faith.

One of the great sacramentals of the Church is the Brown Scapular of Our Lady of Mount Carmel. It is her feast this Thursday 16th July which is why I want to say something about it. Many of you already wear the Brown Scapular because either I or another priest have enrolled you in it. The more people that wear it the better. The Brown Scapular is two pieces of brown wool tied together with a cord and you wear it over your shoulders. 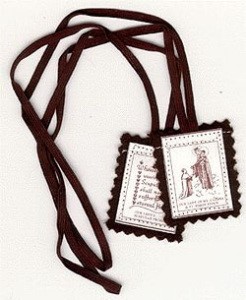 The Scapular that most of us wear today is a scaled down version of the scapular Our Lady gave to St Simon Stock, who was a Carmelite Friar, in 1251 at Aylesford in Kent. So the Brown Scapular, although it is world-famous has its origin here in England. St Simon Stock was the Superior of the Carmelites in England at the time. Simon complained to Our Lady that his order was being persecuted and falling apart and so he begged for her protection. She appeared to him on 16th July 1251 and presented him with the Brown Scapular. The Scapular she gave him was the full version which the Carmelites wear to this day. 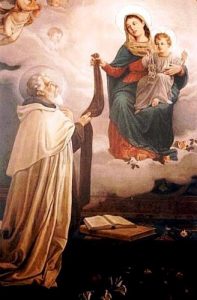 Our Lady giving St Simon Stock the Scapular in 1251

She gave it to him saying, “Son, receive this Scapular as a sign of the privilege which I have obtained for you and the children of Mount Carmel. Whosoever shall die clothed with this Scapular shall not suffer eternal fire.” So the Scapular is a sign of salvation and a pledge of protection. In giving us her garment, Our Lady gives us herself.

Then on 13th October 1917, the final apparition of Our Lady at Fatima, when there also took place the famous Miracle of the Sun,  she appeared to the three seers Jacinta, Francesco and Lucia as Our Lady of Mount Carmel and held out the Brown Scapular to them making them understand that she wanted everyone to wear it.

One should wear the Scapular all the time and kiss it every morning or when you take it off or put it on because it reminds us to ask our Heavenly Mother’s help to keep us out of sin throughout the day. And by wearing it we also tell her we love her and trust her, and we tell her this repeatedly simply by wearing it.

The Brown Scapular has to be the most powerful sacramental because Our Lady also promised St Simon Stock that those who fulfil certain conditions and wear the Scapular, she will free from Purgatory shortly after their death and particularly on Saturdays which is Our Lady’s day. This is known as the “Sabbatine Privilege”. So what are the conditions?

This is not asking much when one considers the privileges. There are many wonderful stories or miracles of salvation brought about by the Scapular. On the same day Our Lady gave St Simon the Scapular, he was called to the bedside of a dying and unrepentant man. He placed his own large Scapular over the dying man and immediately the man repented and died as a friend of God. “Whosoever shall die clothed with this Scapular shall not suffer eternal fire.” Later that day the man appeared to his family and told them he had been saved by “the most powerful Queen and by the Brown Scapular of that man as a shield of protection.”

Pope St John Paul II (1920-2005), often spoke of how he had worn the Scapular all his life. When he was shot in St Peter’s Square by a Turkish assassin on 13th May 1981, as he was being taken into the operating theatre, he asked them not to remove his Scapular.

The two great founders of religious orders, St Alphonsus Liguori (1696-1787), founder of the Redemptorists and St John Bosco (1815-1588), founder of the Salesians both had a special devotion to Our Lady and wore the Brown Scapular. When they died, as is customary, they were buried wearing their priestly vestments, but they were also buried wearing their Scapulars. Many years later, when their graves were opened, their bodies and the vestments had turned to dust, but the Brown Scapular that each wore was preserved perfectly intact. 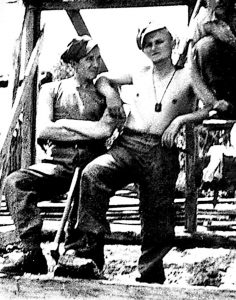 There are countless miracles attributed to the wearing of the Brown Scapular, but it is not a lucky charm. We have to wear it with devotion and strive to lead a good Christian life. We should not presume to be saved just because we wear it. Rather it is a sign of consecration to Our Lady. In these dangerous times in which we live, wear your Scapular. As the priest enrols you he says, “Receive this blessed Scapular and ask the Most Holy Virgin that, by her merits, it may be worn with no stain of sin and may protect you from all harm and bring you into everlasting life.”

If you are not already enrolled and would like to be please let me know. 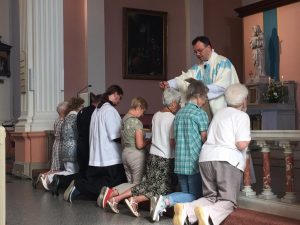