I hope you are all well. We priests remain in reasonably good shape! I am awaiting news to see whether in the light of the Prime Minister’s recent statements on the Coronavirus  we will be able to open the church at least for some hours during the day for private prayer. When this happens it is likely conditions will be attached to it, but I’m not sure yet exactly what they might be. I will let you know as soon as I hear anything official. I do not believe public Masses will resume any time soon. When they do resume a lot of thought will have to be given as to how we organise it with the social distancing rules which will clearly be with us for some considerable time. Let us keep praying for an end to this crisis particularly with the Holy Rosary.

Today is the Feast of Our Lady of Fatima and I celebrated Mass this morning at the Lady Altar in the church. It is the 103rd anniversary of the first apparition. Between 13th May and 13th October 1917 Our Lady appeared to three Portuguese children, Lucia Santos, and Jacinta and Francisco Marto, and asked them to pray the Rosary for world peace, for the end of World War I, for the conversion of sinners and for the conversion of Russia. The central message of Fatima is the same as Our Lord and the Church have always taught: repent and turn away from sin, prayer and reparation. Jacinta and Francisco are now canonised saints and Lucia who died only in 2005 is a Servant of God. 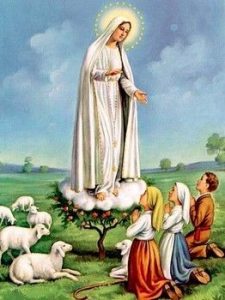 The culmination of the Fatima apparitions was the spectacular Miracle of the Sun which took place on 13th October in front of 70,000 people and had been foretold by Our Lady so as everyone would know that what the children had said was true and also the urgency of the message. Maria de Capelhina, who later became custodian of the original chapel built at Fatima, described how everything turned different colours – yellow, blue and white. Then the sun shook and trembled. “It looked like a wheel of fire that was going to fall on the people. They began to cry out, ‘We shall all be killed.’ They recited acts of contrition. One woman began to confess her sins aloud…when at last the sun stopped leaping and moving, we all breathed a sigh of relief. We were still alive, and the miracle, which the children had foretold, had been seen by everyone.”

Fr Ignacio Lorenco, a nine year old boy at the time, was an eye witness from a village eleven miles away. The sun, he said, “suddenly seemed to come down in a zigzag, menacing the earth. Terrified, I ran and hid myself among the people, who were weeping and expecting the end of the world at any moment.” He also said people were crying out to God to forgive their sins.

Another eye-witness, Dr Almeida Garret, a University Professor said, the sun looked like “a glazed wheel made of mother-of-pearl”, noting that “it spun round on itself in a mad whirl. Then suddenly one heard a clamour, a cry of anguish breaking forth from all the people. The sun, whirling wildly, seemed to loosen itself from the firmament and advance threateningly upon the earth, as if to crush us with its huge, fiery weight.”

There was another extraordinary phenomenon. When the people were arriving at the place of the apparition called the Cova da Iria, it had been pouring with rain for hours, and so they were drenched, the ground was covered in mud and so were they. Yet once the miracle was over and the sun had returned to its normal place, everything was dry, there was no more mud and the people’s clothes were clean. Countless other miracles are associated with Fatima, physical cures and healings and the even more important spiritual healings –  more important because the soul is immortal.

The Holy Rosary, as always, featured very prominently in Our Lady’s message at Fatima. She urged the daily Rosary to bring about the end of the war, and at the final apparition in October she announced herself as the Lady of the Rosary. I have said a lot about the Rosary in the last two newsletters but I cannot emphasise its importance enough. I know many people find the Rosary hard to sustain. Lucia who later became a nun had some beautiful words on this: “Even for people who do not know how, or who are not able to recollect sufficiently to meditate, the simple act of taking the Rosary in their hands in order to pray is already to become mindful of God, and a mention in each decade of a mystery of the life of Christ recalls Him to their minds; this in turn will light in their souls a gentle light of faith which supports the still smouldering wick, preventing it from extinguishing itself altogether.” So persevere with it. God will reward us if we do. And surely if we do what Our Lady asks of us it will hasten the end of this global crisis which the whole world is now living through. 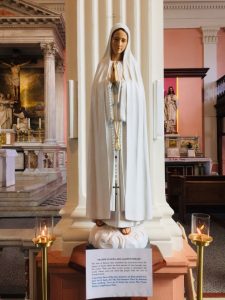 The other great message of Fatima was about making sacrifices for sinners. Our Lady told the three children in the July apparition, “Sacrifice yourselves for sinners and say often, especially when you make some sacrifice, ‘O my Jesus, this is for love of You, for the conversion of sinners, and in reparation for the offenses committed against the Immaculate Heart of Mary.’” This is how we help to save souls which is the Church’s primary mission. It doesn’t mean we have to practice great austerities. Some of the saints were called to this – the three children used to tie ropes around their waists as a penance. But for most of us the sacrifice is to fulfil our duties, keep God’s Law and avoid all sin. Sister Lucia told us that when your daily work is boring or monotonous, that’s your cross. Similarly, today when we go out to the supermarket, we will invariably find we have to queue to even get in. We don’t have the freedom to go where we want. We can’t come into the church and it’s difficult to receive the Sacraments. Maybe someone ignores us or we’re passed over. Someone might speak to us in a disagreeable tone. All these things, (and you will think of others) we can offer up in a spirit of sacrifice.

St Thérèse of Lisieux who is a Doctor of the Church said even the tiniest things can be offered in this way, even something as simple as picking a piece of paper up from the floor. Sister Lucia explained the fact that they are small do not make them any less pleasing to God. We should try and cultivate the habit of this and thus we will grow in merit, atone for our own sins and help to save souls. Doing this gives a purpose to everything. Remember Our Lady at Fatima said so many souls are lost because they have no one to make sacrifices and to pray for them. So remember the prayer: “O my Jesus, this is for love of You, for the conversion of sinners, and in reparation for the offenses committed against the Immaculate Heart of Mary.” So simple and yet so powerful! We just have to remember to do it.

Let us continue to keep in our prayers at this time all the needy, the sick and the suffering, those who have died and their families. Let us also remember our health workers, our teachers and those who have been so generous in making self-sacrifice during this crisis. We pray for the Pope and the Bishops that they will defend our rights as Christians, and for our government that the steps they now take to ease the lockdown will be for the good of all, both spiritually and temporally. Please also keep in your prayers our Confirmation candidates who were due to receive the Sacrament from Bishop Patrick this Friday. Stay strong and pray hard, because we may have a battle on our hands for our Church, our Sacraments and our culture.

Our Lady of Fatima, pray for us!