In the year 1263, a German priest by the name of Peter of Prague was going on a pilgrimage to Rome and he stopped off at the town of Bolsena in Italy to celebrate Mass. He was having problems believing that Christ was truly present in the Holy Eucharist. And so while pronouncing the words of Consecration, blood started to seep from the consecrated Host and trickle over his hands onto the altar and the corporal (a square linen cloth). Naturally he was stunned and at first tried to hide it. But then he interrupted the Mass to go and tell the Pope, Urban IV (1195-1264) who was staying over in the nearby town of Orvieto. The Pope listened to the priest’s account and absolved him and ordered that the miraculous Host and the linen corporal stained with the Precious Blood be brought to Orvieto Cathedral. The blood stained corporal you can still see on display in the Cathedral today as a relic. It was this miracle that prompted Pope Urban to ask St Thomas Aquinas (1225-74) to compose the Mass and Office (the psalms, readings and prayers priests have to say every day) in honour of the Holy Eucharist, and then one year later he instituted the great feast of Corpus Christi. There is a famous fresco by Raphael (1483-1520) entitled “The Mass at Bolsena” depicting this miracle in the Raphael Rooms in the Vatican. 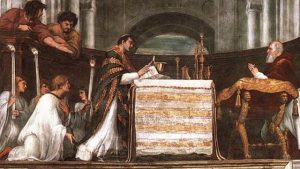 “The Mass at Bolsena” by Raphael

But this miracle is only one of hundreds throughout the centuries testifying to the truth of Our Lord’s Real Presence in the Blessed Sacrament.

Today’s Gospel (John 6:51-58) is one of the most important texts regarding the Holy Eucharist. It is known as the ‘Bread of Life Discourse’ where Our Lord gives His most explicit teaching on His Real Presence in the Eucharist when He says, “I am the living bread which has come down from Heaven. Anyone who eats this bread will live forever; and the bread that I shall give is My Flesh for the life of the world.” The Jews began arguing with each other saying, “How can this man give us His Flesh to eat?” They interpreted Him to be speaking about cannibalism. But JESUS insisted on the literal truth of what He was saying, and this for them was unbelievably shocking. He didn’t say, “No, no, no you’ve got it all wrong. I was only speaking metaphorically.” He responds by making the even stronger statement: “If you do not eat the Flesh of the Son of Man and drink His Blood you will not have life in you… For My Flesh is real food and My Blood is real drink.” He is emphasising that the food and drink He is going to give will be His true Flesh and Blood and that it is going to be necessary to partake of it if we are to have eternal life. 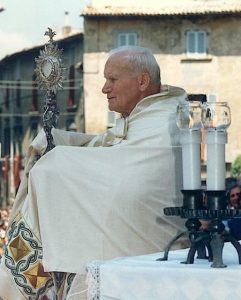 The miracle of the Holy Eucharist was prefigured in the Old Testament (Exodus 16) where God fed the Israelites with the manna (miraculous bread from Heaven) as they wondered the desert for forty years. Thus Our Lord says, “This is the bread come down from Heaven; not like the bread our ancestors ate (the manna in the desert): they are dead, but anyone who eats this bread shall live forever.” Many of the Jews rejected the manna from Heaven and said, “we’re not eating this” and God took their lives.  Those who did eat the manna did eventually die, but they died of natural causes. So in other words, the bread Our Lord was going to give is different from the manna in the desert, because whoever eats this new manna will live forever, because it will be His Divine Flesh. Now if this new manna which Our Lord was going to give was only a symbol, it would mean the old manna was greater than the new, and that’s not how salvation history works. New Testament fulfilments are always greater than their Old Testament pre-figurations. If the Old Testament manna was from Heaven, the manna in the New Testament must be the miraculous bread we need to have eternal life in Heaven.

The Apostles didn’t really understand what Our Lord was saying but they had seen all the miracles He had worked and heard His preaching and so they trusted Him. When many of the people walked away, JESUS said to the Apostles, “Do you want to go away as well?” Peter answered, “Lord, to whom shall we go? You have the words of eternal life, and we have believed, and have come to know, that you are the Holy One of God.” (John 6:68-69).

It was at the Last Supper that Our Lord’s promise was fulfilled when He took bread in His hands and said, “Take ye, and eat. This is My Body. And taking the chalice, He gave thanks, and gave to them, saying: Drink ye all of this. For this is My Blood of the new testament, which shall be shed for many unto remission of sins.” (Matthew 26:26-28). Their eyes were opened as they must have recalled what He had said a year earlier about the heavenly food and drink that would be His true Flesh and Blood. This was the first Mass when Our Lord consecrated the bread and wine into His own Body and Blood.

It was also on this occasion that the Apostles were ordained the first bishops and priests. The Apostles could now, by the will of Christ, perform the miracle of changing bread and wine into His Body and Blood each time they offered Mass. “Do this in memory of Me.” After He had left them, this is what they did. They changed bread and wine into Christ’s Body and Blood and gave Holy Communion to the faithful. The Apostles, knowing that Our Lord wanted to be with us in this way until the end of time ordained other men as  bishops and priests giving them the power to do the same at the Consecration of the Mass. No priest can ever grasp fully the sublimity of what he is doing, but he calls God down to earth again, and through him the Incarnation is renewed. Christ is born again into a priest’s hands as he bows low over the Host saying the words, “Hoc est enim Corpus meum.” “For this is My Body.” But it is only through ordination that a priest receives the power to do this. He is acting “in persona Christi”. Christ is the true celebrant at every Mass. 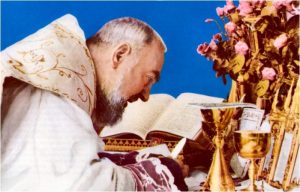 St Padre Pio consecrating the Host: “For this is My Body”

Some of the Protestant reformers in the sixteenth century held that Christ is only present when and if you are receiving the Holy Eucharist. But the Council of Trent (1545-63) declared, “If anyone says that after the Consecration, the Body and Blood of our Lord JESUS Christ are not present in the marvellous Sacrament of the Eucharist, but are present only in the use of the Sacrament while it is being received, and not before or after, and that the true Body of the Lord does not remain in the consecrated Host or particles that are kept or left over after Communion, anyone who denies that, let him be anathema (Session 13, can.4). This is why the consecrated Hosts not used at Mass are reserved in the tabernacle and we always genuflect in front of It and have the red lighted lamp constantly burning by it. Look for the lighted lamp by the tabernacle in any Catholic church and you know Our Lord is there.

St Clare of Assisi (1194-1253) is often depicted carrying a monstrance with the Blessed Sacrament in it, which is rather unusual because she wasn’t a priest. This is because Our Lord worked a Eucharistic miracle through her. In the year 1234, the army of Frederick II, which included many Saracens from Sicily in its number, were plundering the part of Umbria which includes Assisi. They attacked the convent of San Damiano where St Clare and the other sisters were living. Clare, who was very sick prostrated herself before the tabernacle imploring Our Lord’s protection for the convent and for the city. She heard a voice respond, “I will always protect you.” 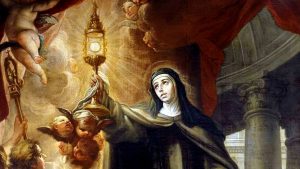 St Clare with the Blessed Sacrament

Clare took the ciborium from the tabernacle, and brought it to a window near the place where the soldiers had set a ladder against the walls in order to scale them. When she raised the Blessed Sacrament on high, the soldiers fell off the ladder and away from the wall as if dazzled, and they all fled.

I have mentioned just two Eucharistic miracles in this letter but many have been authenticated by the Church. You can get a book entitled “Eucharistic Miracles” by Joan Carroll Cruz. It makes fascinating reading. All of these Eucharistic miracles answer any doubts we may have about Christ’s Real Presence in the Blessed Sacrament. “The Word became flesh, and dwelt among us” (John 1 :14). This is not only in Bethlehem, but in every Catholic tabernacle throughout the world. With St Mary’s hopefully being open for private prayer sometime this coming week (it will now be towards the end of the week at the earliest), if you are able, after this long absence of nearly three months, come and visit JESUS here in the tabernacle. There still cannot be any public Masses, but even as restrictions are gradually lifted our access to Holy Communion with all the social distancing rules will be less frequent than we are used to.  But may the Real Presence of JESUS in the Holy Eucharist always be the centre of our Church, of our Faith, of our parish and in the lives of each of us.

May God bless you all and Happy Feast! 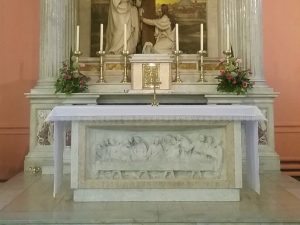 JESUS is truly present in the tabernacle in every Catholic church