Today is the Octave Day of Easter and also Divine Mercy Sunday. We priests continue to remember you all and also your intentions in our daily Masses. Liturgically, everyday this past week has been Easter Sunday, and today’s Gospel (John 20:19-31) includes two appearances of JESUS to His disciples: the first on the evening of Easter Sunday and the second “eight days later” when Thomas was also present. That’s why this Gospel is always read on this Sunday, the Octave Day of Easter. It also includes Our Lord instituting the Sacrament of Confession which is the Sacrament of God’s mercy.

On Easter Sunday Our Lord appeared in the Upper Room to ten of His disciples. Thomas was missing and Judas had hung himself. At first they thought they were seeing a ghost and so JESUS showed them the wounds in His hands and His side, and in Luke’s account He says, “See My hands and My feet, that it is I Myself; handle Me, and see; for a spirit has not flesh and bones as you see that I have” (24:39). So after His Resurrection, and even though His body was now glorified, the wounds remained on His body. There are various reasons for this. The first is to remind us of the great price He had to pay to redeem us. If His wounds had disappeared we might forget what He suffered for us. Our Lord will now bear these wounds for all eternity, and one day when we hopefully get to Heaven we will see Him with them. I think it was St Padre Pio to whom satan appeared in the form of Christ, but he was caught out when the saint asked him, “Where are the marks of the nails?” 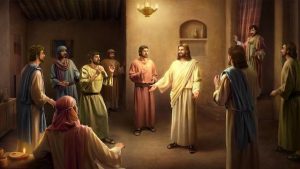 His wounds are also there as a proof of His Resurrection and that His resurrected body was the same body that was born of the Virgin Mary. Another reason is so that He can constantly present them to the Father so that He will have mercy on us. Lest we forget, “By His wounds we are healed” (Isaiah 53:5).

Then He breathes on them and says, “Receive the Holy Spirit. For those whose sins you forgive they are forgiven; for those whose sins you retain, they are retained.” So He gives the power to forgive and to retain sins to the Apostles which presupposes that a confession would take place before. This power is handed on through the Sacrament of Holy Orders. Maybe sometimes we wonder why we have to confess to a priest. Why not tell God direct? The short answer is because that is how Christ wills it. Also Our Lord, knowing our human nature knew that we would want certainty our sins are forgiven when we confess to one of His authorised representatives. When we have made a good confession and we have had the absolution pronounced over us by the priest, we can have certainty that God has truly forgiven us.

But Thomas wasn’t there when Our Lord appeared, and when the other disciples told Him they had seen Him, Thomas said he wanted proof. “Unless I see the holes that the nails made in His hands and can put my finger into the holes they made, and unless I can put my hand into His side, I refuse to believe.”

The following Sunday (eight days later) once more they were in the Upper Room, and this time Thomas was with them. Again Our Risen Lord stood among them but He did not reprimand Thomas. He simply said to him, “Put your finger here; look here are My hands. Give Me your hand; put it into My side. Doubt no longer but believe.”

Throwing himself on his knees, Thomas makes a full confession of faith saying, “My Lord and my God.” As Venerable Fulton Sheen put it: “he who was the last to believe was the first to make the full confession of the divinity of the Risen Saviour.” As Thomas encounters the Risen Christ, He realises this isn’t just the Messiah he is kneeling before, but ‘Emmanuel’, ‘God with us’, in the flesh, who was crucified, died and is now risen. And Our Lord replied, “You believe because you can see Me. Happy are those who have not seen and yet believe.” Archbishop Sheen also says that had Thomas believed through the testimony of his fellow disciples, his faith would have been greater. He knew from the Scriptures and from what Our Lord had said that the Crucifixion would take place, but he wanted the additional proof of the senses. But for us who haven’t seen, Our Lord has given a special grace to be able to come to that same faith as St Thomas without seeing, and solely on the testimony of the Apostles and the many other witnesses who saw Him after the Resurrection. Thank Him for that gift. 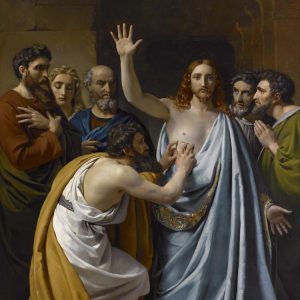 As regards Divine Mercy Sunday, I have already written about the great graces available today in the newsletter and of the Spiritual and Corporal works of mercy we are all bound to perform and that JESUS asks us to perform. As God shows us mercy, we must be merciful to others. JESUS told St Faustina, “I am giving you three ways of exercising mercy toward your neighbour: the first — by deed, the second — by word, the third— by prayer. In these three degrees is contained the fullness of mercy, and it is an unquestionable proof of love for Me. By this means a soul glorifies and pays reverence to My mercy” (Diary, 742).

And as I do every year on this feast, this morning I blessed the Divine Mercy image hanging in the church which has the words, “JESUS, I trust in You” along the bottom. Trusting in Divine Mercy is trusting in God rather than in ourselves. And Our Lord told St Faustina that anyone who venerates this image will not perish (Diary 48). “I am offering people a vessel with which they are to keep coming for graces to the fountain of mercy. That vessel is this image with the signature: JESUS, I trust in You. I desire that this image be venerated, first in your chapel and then throughout the world” (Diary 327). The rays represent the graces poured out upon the world especially through Baptism and the Holy Eucharist. 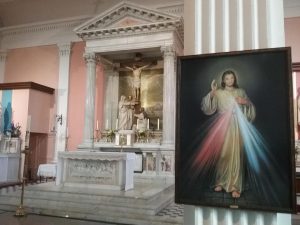 In conclusion, let us ask Our Lady, the Mother of Mercy and the Mediatrix of all Graces to help us be merciful to others, particularly in our hour of need, through our actions, our words and our prayers. She will obtain for all of us, if we ask her, the graces to be instruments of her Son’s mercy and love.