In the centre of St Peter’s Square in Rome stands the world famous obelisk, over 80 feet tall and weighing over 325 tons. It originally stood in a pagan temple in Egypt and was brought to Rome by the evil Emperor Caligula (12-41 AD) and a decade later the equally terrible Nero (37-68 AD) erected a circus around it, and it was there that St Peter was martyred by being crucified upside down, with the obelisk probably being the last thing he saw. In the sixteenth century it was moved to its present location by Pope Sixtus V (1521-90) who had engraved upon it: “Christus vincit, Christus regnat, Christus imperat. Ab omni malo plebem suam defendat”. (Christ conquers, Christ reigns, Christ commands; may He defend His people from all evil.” 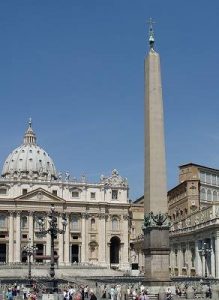 The obelisk in St Peter’s Square

These words are traditionally sung on today’s Solemnity of Christ the King. Notice these words are not in the past tense, because He still conquers, He still reigns and He still commands. He conquered death, Satan and all evil by His Passion, Death and Resurrection, and for this reason there is a relic of the True Cross of Christ at the top of the obelisk. He commanded the Apostles to preach and teach His Gospel, and He commands all of us to take up our cross and follow Him. He reigns because He is the eternal God who created everything out of nothing, holds all things in being and who will come in glory at the end of time to judge the living and the dead. And this is what Our Lord is referring to in today’s Gospel when He tells the Parable of the Sheep and the Goats – His Second Coming or the Final Judgement at the end of time, also called the parousia, and we are expected to preach on it at this time of year.

There are two judgements. The Particular Judgement happens at death to each individual, whereas the General or Final Judgement is at Christ’s Second Coming. At the Final Judgement, all the dead, that is everyone who has ever lived, will be raised up in their bodies, and the Particular Judgement will be confirmed and made known to all, but it cannot be changed. Our Lord uses the analogy of a shepherd separating the sheep and the goats as a metaphor for the final separation of the righteous, who will inherit everlasting life, and the wicked, who will inherit everlasting punishment. The imagery of sheep and goats is no accident because sheep, generally speaking, are docile to their master whereas goats tend to be more stubborn. So the righteous are those who are obedient to God and follow His voice, whereas the goats, the wicked, are those who are prideful, who are stubborn and who have refused to do God’s will. 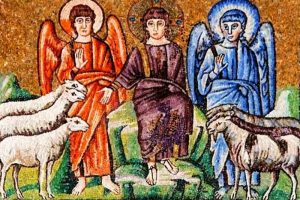 The Sheep and the Goats

To the sheep He will say, “Come you whom My Father has blessed, take for your heritage the Kingdom prepared for you since the foundation of the world.” This Kingdom is Heaven. And to the wicked He will say, “Go away from Me with your curse upon you, to the eternal fire with the devil and his angels.” This obviously refers to Hell. Often today, people either don’t like Hell to be mentioned or they don’t believe in it, but we should note Our Lord, who is God, left no doubt about its existence and spoke of it many times in the Gospels, precisely because it is a reality, and therefore we need to be warned of it. To fail to mention it would be a distortion of the Gospel.

So the question we all want to know the answer to is what must I do to get into the Kingdom of Heaven? We certainly need to have faith and Our Lord teaches us that elsewhere in the Gospels. But this parable places an emphasis on the Corporal Works of Mercy which are:

I think the story of St Martin of Tours (ca. 316-397) is well known. On a bitterly cold day, Martin met a poor man, unclothed and shivering by the city gate. Martin felt sorry for him and so he drew his sword, cut his own cloak in two and gave one half to the beggar. That night, Martin saw Christ dressed in the cloak he had given the man saying, “Martin, still a catechumen, has covered Me with his garment.” So the reward for these acts of mercy is to enter the Kingdom of Heaven. 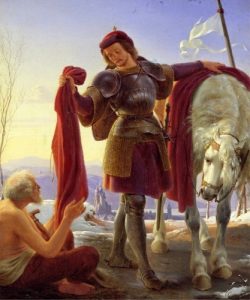 The goats, on the other hand, were punished for their sins of omission and thrown into the eternal fire with the devil and his angels. The fallen angels then are also separated from God for all eternity, and the fire must be a spiritual one because angels don’t have bodies. Perhaps the really shocking thing here is that the goats don’t find themselves there for sins like murder, adultery or the normal things we associate with grave sin, although those are described as grave sins in both the Old and New Testaments. Just as in last week’s Gospel of the Parable of the Talents, they find themselves there for sins of omission. They didn’t perform any works of mercy. In other words, they didn’t love their neighbour and therefore didn’t love God (1 John 4:20). 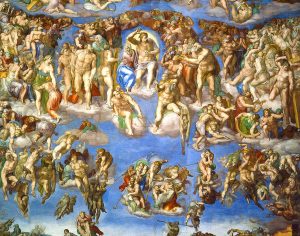 Michelangelo’s “Last Judgement” in the Sistine Chapel in the Vatican

Secondly, the Church is very clear about the reality of Hell, and the teaching in the CCC is based on this Parable of the Sheep and the Goats. “We cannot be united with God unless we freely choose to love Him. But we cannot love God if we sin gravely against Him, against our neighbour or against ourselves: “He who does not love remains in death. Anyone who hates his brother is a murderer, and you know that no murderer has eternal life abiding in him.” (1 John 3:14-15). Our Lord warns us that we shall be separated from Him if we fail to meet the serious needs of the poor and the little ones who are His brethren. To die in mortal sin without repenting and accepting God’s merciful love means remaining separated from Him for ever by our own free choice. [Emphasis mine]This state of definitive self-exclusion from communion with God and the blessed is called “Hell.” (#1033). So we should notice God respects our freedom and we have to choose freely to love Him. And if we choose to separate ourselves from His love, that is by definition, Hell.

The parable ends on a very positive note: “the virtuous” will enter into “eternal life.” When Our Lord speaks about Hell He always concludes with the reality of Heaven. That’s what we were taught to do in the seminary in Rome. So here is what the CCC says:

“Those who die in God’s grace and friendship and are perfectly purified live for ever with Christ. They are like God for ever, for they “see Him as He is,” face to face…This perfect life with the Most Holy Trinity – this communion of life and love with the Trinity, with the Virgin Mary, the angels and all the blessed – is called “Heaven.” Heaven is the ultimate end and fulfilment of the deepest human longings, the state of supreme, definitive happiness” (#1023-1024).

I’m sure we all want to be happy for ever, with Our Lord, Our Lady and all the angels and saints, and that’s what Heaven is. So our liturgical year comes to an end with our eternal destiny of Heaven being set before our eyes where Christ reigns as King of all Creation. We have to decide if that’s what we want. This Parable of the Sheep and the Goats exhorts us to live lives of love now on earth so as we can spend an eternity of love and happiness in the Kingdom of Heaven. 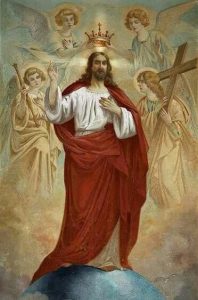