Inscribed around the inside of the Dome of St Peter’s Basilica in Rome in Latin in letters six feet high are the words of Our Lord to Simon Peter from today’s Gospel: “Tu  es Petrus et super hanc petram aedificabo Ecclesiam meam.” “You are Peter and upon this rock I will build My Church.” (Matthew 16:18). 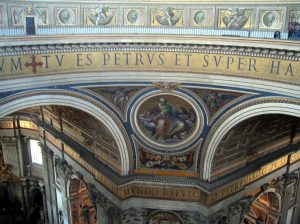 The inscription inside the Dome of St Peter’s Basilica in Rome. “Tu es Petrus”

This is the promise of the Primacy to Peter, and we believe that this is not only a primacy of honour but also of jurisdiction. Peter received from Our Lord supreme authority to teach and govern the whole Church. And Peter has a line of successors in this who we call the Popes. Pope Francis is the 266th Successor of St Peter.

Peter’s name to begin with was Simon and it was Our Lord who changed it. “So you are Simon the son of John? You shall be called Cephas” (which means Peter) (John 1:42) and Peter means rock. Whenever someone’s name is changed in Scripture, it signifies a new vocation. Abram becomes Abraham, Sarai becomes Sarah, Jacob becomes Israel and so on. Peter is going to be the foundation of the Church Christ will found. “You are Peter and upon this rock I will build My Church.” So Our Lord compares His Church to a house that is built on a rock which will give it stability and which will be its foundation, and that rock is Peter. Note here that JESUS says Church (singular) and not churches. The Church is His Body and He cannot have many bodies. There is only one Church – the Catholic Church which is founded on a single man who is to have divine assistance, and that man is Peter. There is a famous phrase coined by St Ambrose of Milan (ca. 340-397) in the Fourth Century: “Ubi Petrus ibi ecclesia.” “Where Peter is, there is the Church.”

Our Lord also gives Peter the “Keys of the Kingdom of Heaven” or the keys of the Church.  Keys were regarded by the Jews as a symbol of ownership or supreme authority so that he who holds the keys is the master of the house. Therefore Peter is to be the ruler of the Church. He is also given the power of binding and loosing. Whatever Peter commands or forbids, he does it in the name of Christ. The keys are the symbol of the Papacy and you can see the crossed keys on the notice board outside our church. 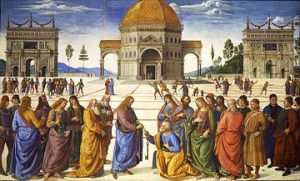 As I have said above, this was the occasion of the promise of the Primacy, but the conferral of the Primacy took place after the Resurrection when three times Our Lord asked Peter if he loved Him and three times Peter replied in the affirmative. JESUS said, “Feed My lambs, feed My sheep.” (John 21:15-17). Our Lord here gives Peter complete jurisdiction over the Universal Church. JESUS said of Himself, “I am the Good Shepherd” (John 10:11) and He is now delegating that authority to Peter.

Peter might seem an extraordinary choice on Our Lord’s part to be the visible Head of the Church on earth. After all, he denied three times that he even knew Him and Our Lord had prophesied this. He said to Peter, “But I have prayed for you that your faith may not fail; and when you have turned again, strengthen your brethren” (Luke 22:32). And St Paul tells us, “God chose what is foolish in the world to shame the wise, God chose what is weak in the world to shame the strong.” (1 Cor. 1:27) And we should not assume that these powers given to Peter were to end with him. The powers are transferred to his successors – the Popes. St Peter was the first Pope. The Pope has to guard the Deposit of Faith and feed the flock with the Truth. We believe that in order to do that, the Pope under certain conditions has the charism of infallibility. That is to prevent him from formally teaching error on faith and morals. I have already written about this in more detail in my letter of 28th June.

Just as an illustration of God protecting His Church from formally teaching error, Pope Sixtus V who reigned for just five years (1585-90) did much good in reforming the Church. But he made a grave mistake in trying to reform St Jerome’s translation of the Bible (Latin Vulgate) which was the official translation. At this time there were many versions of it in circulation so the Pope wanted to provide the best and most accurate version, particularly as Protestantism was really gaining ground at this time. So he got together a group of scholars which included St Robert Bellarmine (1542-1621) and they began the revision process. Pope Sixtus didn’t like their work, abandoned the commission and decided to do it himself, something which was way above his intellectual ability. When he showed the Cardinals what he had done, it was full of errors, parts had been missed out and he had even added things in. This was a serious danger to the Church as Protestants would inevitably say the Pope thinks he is equal to God in changing His Word and would effectively be trying to correct the Holy Spirit. Needless to say there was huge opposition to the Pope’s plans from important theologians and scholars and Pope Sixtus was about to make shipwreck of the doctrine of infallibility. He was preparing to promulgate his work as the only official version of the Scriptures in the Catholic Church. The Papal Bull was already written, and copies of his new translation were already bound and delivered to all the Cardinals in Rome. It seemed nothing could stop him and all he had to do was to formally promulgate the Bull. But then he died. He had been in excellent health up to this point and had been one of the most active Popes ever. The advance copies were quietly withdrawn by the Cardinals and the Papal Bull never saw the light of day. Did God intervene and prevent Sixtus V from formally teaching error to the whole Church? Who knows, but his death prevented him from crossing that line.

The Church will also last till the end of time because “the gates of Hell shall not prevail against it” (Matthew 16:18) and the Gospel must be preached to the ends of the earth and all brought into the Church which as the Catechism of the Catholic Church teaches, “all salvation comes from Christ the Head through the Church which is His Body” (#846).

There have been many throughout history who have sought to destroy the Church and the Papacy, but they will always fail because of Christ’s promise that He would be with His Church until the end of time (Matthew 28:20). 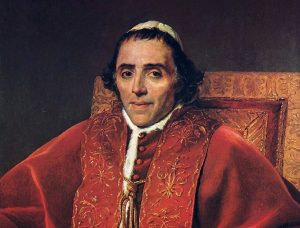 Napoleon Bonaparte (1768-1821) was a baptised Catholic but during much of his life made many threats against the Church and the Pope. In 1804 he insisted the Servant of God, Pope Pius VII (1742-1823) came to Paris to crown him as emperor. When the Pope arrived he was very badly treated and during the coronation ceremony Napoleon famously took the crown from the Pope’s hands and placed it on his own head! Afterwards he tried to bully the Pope into moving the Papacy to Paris so as he could control the Church to which the Pope replied, “How well you act comedy.” Napoleon was so furious that he tore a drawing of St Peter’s Basilica to shreds in front of the Pope declaring, “This is what I shall do to the Church – I will crush her utterly.” To this, Pius VII calmly replied, “Now you act tragedy.” 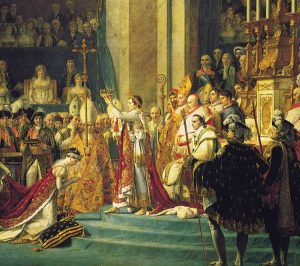 The Coronation of Napoleon in 1804  by Jacques-Louis David. Pope Pius VII is seated on the right

A few years later, in 1809, Napoleon seized the Papal States – these were territories in Italy which belonged to the Church. From that moment Napoleon’s fortunes changed. Four days later, he suffered his first major defeat in battle. Later on he had Pope Pius arrested which resulted in the Pope excommunicating him. Napoleon reacted, “Does he suppose the [weapons] will fall from the hands of my soldiers?” Strangely enough this is exactly what happened. When he invaded Russia he was forced to retreat during the brutal Russian winter, with many soldiers becoming so weak due to the cold they could no longer carry their weapons. Napoleon was eventually defeated and sent into exile. He sometimes amused himself by complaining about the Church and pretending any religion was superior to Catholicism, but he also begged the Pope to send him a Catholic chaplain, while also praising JESUS Christ as truly divine, and stating that “The nations of the earth pass away, and thrones fall to the ground; the Church alone remains.” Napoleon learned the hard way that Our Lord’s promise to Peter will never fail.

No one, and nothing, will ever overcome the Catholic Church. To sum it all up, the great Archbishop Venerable Fulton Sheen (1895-1979), speaking of the Church in the first person singular wrote:

“I have adapted myself to every form of government the world has ever known; I have lived with Caesars and kings, tyrants and dictators, parliaments and presidents, monarchies and republics. I have welcomed every advance of science, and were it not for me the great records of the pagan world would not have been preserved. It is true I have not changed my doctrine, but that is because ‘the doctrine is not mine but His that sent me.’ I have changed my garments, which belong to time, but not my Spirit, which belongs to eternity. In the course of my long life, I have seen so many modern ideas become unmodern, that I know I shall live to chant a requiem over the modern ideas of this day as I chanted it over the modern ideas of the last century.

I shall grow weak when my members become rich and cease to pray, but I shall never die. I shall be crucified as I was on Calvary, but I shall rise again. And finally when time shall be no more, and I shall have grown to my full stature, then shall I be taken into Heaven as the bride of my Head, Christ.” 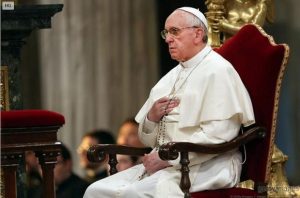 Pope Francis, Vicar of Christ and the 266th Successor of St Peter