Thank you for all your continued messages and good wishes and promises of prayers. We priests continue to remember you all and your intentions at the altar each day. We are there on your behalf. But we do miss you. I know so many of you are longing to be at Mass and we are longing to see you there.  It’s always nice to see some of you when I’m out on my rounds, but it’s hard to know how long the present situation will continue. Hopefully it may be possible to at least open the church doors soon for private prayer. Let us pray that may be so.

Today’s Gospel (Luke 24:13-35) is the account of the two disciples meeting the risen JESUS on the road to Emmaus. I’ve written about this in a previous letter for Easter Wednesday and also in the newsletter this weekend. So I’m going to talk about something different but still connected to it – the doctrine of the Resurrection of the Body.

We say in the Creed every week, “I look forward to the resurrection of the dead and the life of the world to come.” When a person dies in a state of grace, their soul will go to Heaven either immediately or after Purgatory. But on the Last Day when we are all summoned by Christ to judgement, all those who have ever lived will rise from the dead with their bodies – the same bodies that they had during their earthly life. Whereas the Angels are pure spirits, human beings are made up of body and soul, so our ultimate state must involve the body too. And so we read in the book of Job, “For I know that my Redeemer liveth, and in the last day I shall rise out of the earth. And I shall be clothed again with my skin, and in my flesh I will see my God” (Job 19:25,26).

To return to Our Lord’s Resurrection, the Gospel says, “They [the women] went in [to the tomb] and did not find the body.” (Luke 24:3). ‘Body’ here means a corpse. So the tomb was empty. The Gospel does not say that it was just Our Lord’s soul that lived on (which is what some people advocate), and neither is His Resurrection the same as Lazarus being raised (John 11:38-44). Lazarus returned to an ordinary earthly life and eventually died again. Our Lord did not return to ordinary life. Lazarus also rose by the power of another (JESUS), whereas Our Lord rose by His own power as God. He is now immortal and will never die again. And it is His Resurrection that is the cause of ours. 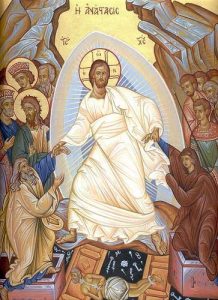 This also has a connection with the Holy Eucharist. In the Incarnation, when God became man, He took what was ours – that is our humanity – and gave us what is His; that is a sharing in His divinity. And it is this same body that was crucified, died, was buried and rose again, ascended into Heaven where He is now in glory, that we receive in Holy Communion. So when we receive Him we are divinised because Holy Communion is His risen body. And this is what St Peter says in his second Epistle, that we have been made partakers in Christ’s divine nature (2 Peter 1:4). And Our Lord Himself says when He announces the Eucharist, “He who eats My flesh and drinks My blood has eternal life, and I will raise him up at the last day” (John 6:54). And thus we share in the glory that has been His for the past two thousand years.

From the Scriptures and the teaching of the Church, we know that at the Last Day our glorified resurrected bodies will suffer no sickness or death and won’t be weighed down in any way. They will have a certain ‘spiritual’ quality about them just as Our Lord did after His Resurrection. He could pass through walls and doors but at the same time He was real flesh and blood and people could touch Him. He said to the Apostles, “A spirit has not flesh and bones as you see that I have” (Luke 24:39).

In Matthew’s Gospel, when the holy women arrived at the tomb it was still sealed, and then it was the Angel who rolled the stone away. And when they went in, the tomb was already empty. In other words, the resurrected and glorified body of JESUS had passed through the stone earlier. At the end of time ours will be able to do the same. Our glorified bodies will also be free from all deformity and filled with beauty and radiance as we read in Matthew 13:43: “The just shall shine as the sun in the kingdom of their Father.” As the great Scripture scholar Scott Hahn puts it, “The Angels, who are pure spirits, when they see our glorified bodies will stare in wonder and awe at what God has done through the Incarnation of Christ His Son, through His Death and Resurrection, and how His resurrected body has become the source of all this glory that ends up being ‘downloaded’ into our dead bodies, so that they are resurrected and raised to a level that exceeds our highest hopes.”

So the really important point is that by the Resurrection of JESUS we do not only mean that His spirit lives on. No! The foundational truth of Christianity involves a corpse being transfigured and resurrected, entering into a new state in which that body can never die again. He is alive now in that same body He took from His Mother, the Blessed Virgin Mary.

So in brief, this is the Resurrection of the Body. This is what God has done for us and this is our destiny – truly a cause for rejoicing and giving thanks!

May God bless you all and I hope to see you in church soon.