Happy Feast! Today’s Feast of Pentecost is one of the greatest of the liturgical year and we can read a full account of it in the Acts of the Apostles (2:1-42), and we hear the first part of it in today’s First Reading. The Gospels do not give an account of Pentecost.

On the ninth day after Our Lord’s Ascension and the fiftieth day after His Resurrection, He sent the Holy Spirit upon the Apostles, as He had promised (John 16:7). Our Lady was there too (Acts 1:14). He came with a mighty wind and appeared to the Apostles as “tongues as of fire” and they were filled with truth, love, zeal and fortitude. Previously they were timid men, but now they went out boldly into the world and preached the Good News that JESUS is the true Messiah and that it is by His Name alone that we can be saved (Acts 4:12). This Feast is regarded as the birthday of the Church. 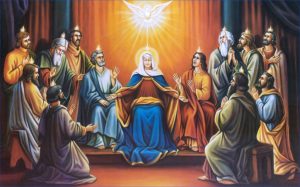 Pentecost was a Jewish feast and literally means ‘the fiftieth day’. On this day the Jews celebrated the end of the grain harvest and the giving of the Covenant on Mount Sinai (Exodus 23:16). And now on this new Pentecost, the Apostles went out to gather the harvest of souls and announce the New Covenant. And after Peter preached, “those who received his word were baptised, and there were added that day about three thousand souls” (Acts 2:41).

A question I sometimes get asked as a priest is about the ‘gift of tongues’. There is a lot of confusion today about what this really means. Some people believe you can pray for it and receive it. St Thomas Aquinas teaches that these are graces which are gratuitously given. God gives them to whom He wills, but that they are always ordered toward the good of the Church. You cannot merit these gifts and neither do these gifts depend upon the holiness of the particular individual. Some people claim they have the gift of tongues, but usually upon closer examination they clearly do not. There is a story of a priest who was a linguist and was invited to one of these meetings where they were claiming to speak in tongues, but when they started doing it he walked out. When asked why he had left he explained he had recognised one of the languages and that the person speaking the language was praising Satan. Satan can cause people to speak languages they don’t know, as any exorcist will tell you, so we should be very wary of these types of things. People speaking some sort of gibberish can also claim to be speaking in tongues. But why would God use intelligent human beings to do something so absurd, and how would this be giving Him honour and glory?

So what is the gift of tongues the Apostles had at Pentecost? It is clear from the Scriptures that the Apostles who were Galileans were all speaking their own language which was probably Aramaic, but the people who were listening heard it in their own language, whether they came from Persia, Media, Cappadocia, Asia or Egypt. This was the miraculous gift – that they heard the Apostles preach in their own language. In modern times St Padre Pio sometimes had this gift when hearing Confessions of foreigners who couldn’t speak Italian. The purpose of this gift of tongues at Pentecost was obviously to aid the growth of the Church. The Gospel was to be preached to all nations – it wasn’t just for Israel.

Also the gift of tongues signified a reversal of the confusion at the Tower of Babel in the Old Testament. You probably know the story in Genesis chapter 11. The whole world had just one language, and man, because of his pride decided to build a tower up to Heaven to glorify himself rather than God. So God caused mankind to speak different languages so as they couldn’t communicate with each other and build the tower. So Pentecost is the undoing of the sin of Babel, and God is showing us that the only way the world will truly be united is not through human effort and through human pride and power, but through the power of the Holy Spirit and through the Church.

One of the glories of the Church is her official Latin language as it unites the faithful throughout the world in worship. This is just one good reason why it is important we don’t let our heritage of Latin fall into disuse. While there are obviously advantages to having much of the Liturgy in the vernacular, being able to sing and say some of the prayers and hymns in Latin (which was mandated by Vatican II) is a connection with our historical roots going right back to the catacombs. Many of the Latin chants would have been known by the early Fathers and Saints of the Church as well as all the Faithful. And of course, in these days of much international travel we can unite and pray together as Catholics when we don’t all speak the same native tongue. We are the Universal Church, and so we have a universal language.

One final point. We might not always realise that a perfect understanding of the Deposit of Faith was infused into the Apostles at Pentecost. Up to this point they seemed to be in a rather confused state about what Our Lord had taught. But when the Holy Spirit came upon them they understood perfectly everything He had taught them. This was a very necessary gift, because if they were going to preach the Gospel to the ends of the earth they had to understand what it meant. And as St Paul says, they were the foundation stones of the churches they would found (Ephesians 2:20), and therefore they had to be able to teach the truth without error. So the Church teaches that each of the Apostles enjoyed infallibility when they spoke officially as Apostles and Teachers of the Faith. In other words there was no error in their teaching. And that teaching is handed down to us today through the Magisterium (teaching authority) of the Church. It is for this reason that the Church also teaches that Divine Revelation concluded with the death of the last Apostle. And so long as we believe what the Church has always taught or the Deposit of Faith we are not going to be led astray. As the Apostle Paul wrote to the Galatians, “But though we, or an angel from Heaven, preach a gospel to you besides that which we have preached to you, let him be anathema” (1:8). So beware of novelties! The job of the Pope and the Bishops who are the Successors of the Apostles is to guard that Deposit of Faith. The Bishops, unlike the Apostles, do not enjoy personal infallibility and the Pope only has infallibility under very strict conditions. The last infallible pronouncement was made by Venerable Pope Pius XII in 1950 when he defined the dogma of the Assumption of Our Lady. When those conditions do not exist there is no guarantee of infallibility, but that is a topic for another occasion.

As I mentioned at the beginning, Our Lady was present with the Apostles when the Holy Spirit came down upon them two millennia ago. On this final day of May which is her month, let us entrust ourselves to her maternal care and intercession so that the Holy Spirit may descend in abundance upon the Church in our day, fill the hearts of all the faithful and enkindle in us the fire of His love.