On the Sunday after Pentecost, we always celebrate the Solemnity of the Most Blessed Trinity or Trinity Sunday as it is more commonly called. The doctrine of the Most Holy Trinity is the central mystery of our faith (Catechism of the Catholic Church #234). That is there is one God and three Persons, Father, Son and Holy Spirit. When you think about it, the Trinity really is the central mystery of our Faith. 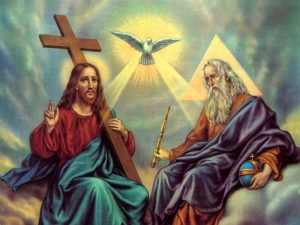 What happens at the beginning of your Christian life when you’re baptised? The priest pours water on your head while saying, “I baptise you in the name of the Father, and of the Son and of the Holy Spirit.” Each time we come into church we dip our fingers into the Holy Water stoup and make the Sign of the Cross which is Trinitarian. We begin Mass with the Sign of the Cross and the priest blesses in the name of the Trinity at the end of Mass. Some of the prayers at Mass conclude with a Trinitarian formula. So the Trinity really is part of our devotional life. Whereas many other mysteries of the Faith tell us about what God has done for us, like the Holy Eucharist, the Crucifixion or the Resurrection, the doctrine of the Trinity tells us Who God is. But it is a mystery that we will never fully understand.

The great St Augustine of Hippo in the fourth century was writing a treatise on the Trinity (De Trinitate). One day as he was walking along the seashore contemplating, he saw a little child running backwards and forwards from the sea to a spot on the seashore. 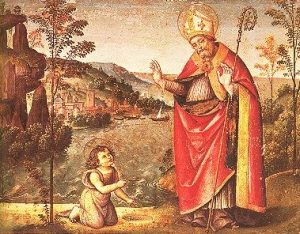 The boy was using a shell to carry water from the large ocean and pour it into a small hole that he had dug in the sand. Augustine came up to him and asked him what he was doing. “I’m trying to bring all the sea into this hole,” the boy replied. “What?” said Augustine. “The hole cannot contain all that water.” The boy stood up, looked him in the eyes and said “It is no more impossible than what you are trying to do – comprehend the immensity of the mystery of the Holy Trinity with your small intelligence.” Augustine was so struck by the reply he glanced away for a moment in thought and when he looked back the child had vanished. Some people think the boy was an angel while others that it was the Christ Child Himself who came to remind Augustine of the limits of human understanding in relation to the great mysteries of our Faith. But this doesn’t mean we cannot have some comprehension of it.

So… the Trinity means there are three Persons in God and only one nature. Now that’s not as complicated as it sounds! When we say ‘nature’ it answers the question “what?” So if you ask “What am I?” I am a human being. But ‘person’ answers the question “who”. So if you say, “Who am I?” I am Fr Paul. These are two distinct things. So when we apply this to God, the Trinity is telling us there is one divine ‘what’. That is there is one divine nature or one God. But then there are three ‘who’s’, who share that one divine nature: the Father (the First Person), the Son (the Second Person), and the Holy Spirit (the Third Person of the Trinity). And that is basically it. It’s above our ability to understand it fully, but God has revealed it to us. Although the word “Trinity” is not used in Scripture there are many references to it in the New Testament. It is even hinted at in the Old Testament. In Genesis when God creates the universe, He says, “let us make man in our image” (1:26) and there are a number of instances in the Old Testament where if we read it in the light of the New that we can see this. But God chose not to fully reveal it then, probably because Israel at that time wouldn’t have been able to grasp the concept of three Persons in one God and it may have evolved into some sort of polytheism (many gods). It was necessary for the Jews to first understand that there is only one God and that it is He who saves us. It is only when Christ comes that knowledge of the Trinity becomes explicit, and then it is fully revealed at Pentecost. 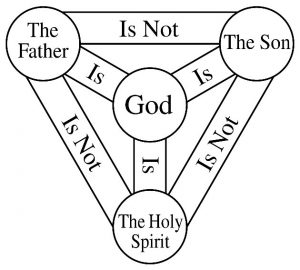 Let’s take the Gospel for today (John 3:16-18). It contains one of the most well known quotes from the Bible. “God loved the world so much that He gave His only Son so that whoever believes in Him may not be lost.” A more accurate translation of the Greek would say “that He gave His only begotten Son.” This is important because it makes clear that JESUS is a unique Son. In the Old Testament Angels are sometimes called sons of God. The New Testament refers to Christians as being sons of God or children of God because it is God Who has given us life. And in the broad sense all human beings are children of God because He created all of us. But when we say Our Lord is the only begotten Son (as we do in the Creed every Sunday), this is something different. It means JESUS is the eternal Son of God. That is He is uncreated and eternally begotten of the Father. He was always the Son and there was never a moment when He was not. This is also implied when the Gospel says, “For God sent His Son into the world.” If He was sent He already existed. When we were conceived in our mother’s womb we were created out of nothing by God. The same goes for the Angels. They had a beginning just as we do. But JESUS did not. As the Son, He was sent into the world to take on our human nature, which means that He is not just fully human, He is also fully divine. So JESUS is the eternal, uncreated Son of God who took on our human nature in time, and He was conceived in the womb of Our Lady by the Holy Spirit. But He existed before this from all eternity. And this is important to the Trinity because it shows us there is more than one Person in the one God. As I have already said, this is beyond our understanding but we need to at least grasp the basic meaning of it, so that we know what we believe in, and we must believe it, because God Who is absolute Truth has revealed it to us.

Many, of course, deny this doctrine. People like Arius and Mohammed take truths of the Christian Faith and deny first and foremost the Trinity. The Jehovah’s Witnesses also deny the Trinity. They believe JESUS is Michael the Archangel. So we do well to always keep in mind Our Lord saying, “Go therefore and make disciples of all nations, baptising them in the name of the Father and of the Son and of the Holy Spirit” (Matthew 28:19).

The grace of Our Lord JESUS Christ, the love of God and the communion of the Holy Spirit be with you all. (1 Corinthians 13:13). 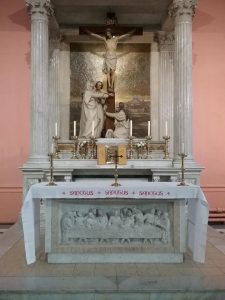