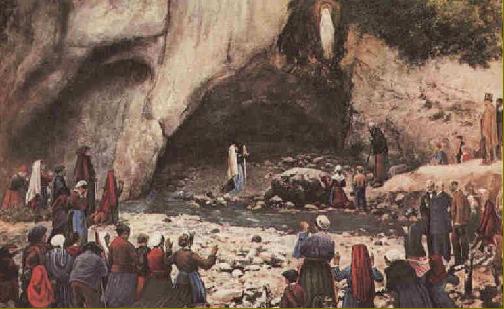 Dates in The Life Of St Bernadette

1844 January 7th, at the Boly Mill, Lourdes (family home), birth of Bernarde-Marie Soubirous child of François Soubirous (a miller of some standing) and his wife Louise Casterot.

When she was a few months old, her mother was badly burned by a falling candle and could not feed the baby. Bernadette was sent to her mother’s friend Marie Laguës married to a substantial farmer in the village of Bartres, 3 km from Lourdes, who was wet-nurse to the baby (her own baby having died) where Bernadette stayed for well over a year before returning to her family in Lourdes

1856 Bernadette belonged to a family of millers too trusting and generous to make a good living at the Boly Mill. The attics of many families would have remained empty if the Soubirous family had not lent a few bags of four. As always the way the number of good clients lessens while the number of those who could not pay increases.

The poor results of the mill lead to financial difficulties and so in May the Soubirous family were expelled from their dwelling, and Uncle Andre Sajous arranged for them to live in the “Cachot” (an old prison cell) in Rue des Petits Fosses parents and their surviving children ‘out of 9 whom 5 died in infancy lived in this one-room hovel.

1857 On March 27th Bernadette’s father Francios Soubirous is imprisoned for the theft of flour. Maisongrosse, the victim. Suspected him because as he said “It was his miserable condition that made me think he was the author if the crime.” He left prison on the 4th of April 1857, his case being dismissed of insufficient grounds.

1857 September, Bernadette was sent again to Bartres. Now aged 13, she could not read or write, she worked on the farm of her foster-mother, looking after the little children, working in the kitchen and minding the lambs in the sheepfold (The “bergrie”: hence she has been called the “Little Shepherdess”.

1858 Near the end of January she returned to Lourdes (to the Cachot) So that she could join the Class to prepare for her First Holy Communion.

1859 At 14 years of age Bernadette if a frail, delicate child. She has asthma and in 1955 had cholera which delayed growth. The eldest if four children, she is unable to attend school and is illiterate. She cannot go to catechism either and has not as yet made her first holy Communion.

1. On 11th February, a Thursday, Bernadette went with her sister and a friend to the banks of the river Gave to collect old bones and driftwood. That was when she saw Our Lady for the time. Bernadette made the sign of the Cross and said the Rosary with the lady “Dressed in white with a blue sash, and a yellow rose on each foot.” Nothing was spoken. When the prayer ended the Lady smiled and suddenly vanished.

2. On Sunday 14th February Bernadette was drawn to the Grotto. After the first decade of the Rosary she saw the same Lady and shook some holy water at her. The lady smiled, bent her head and, when the Rosary ended, disappeared.

3. On Thursday 18th February. The lady spoke for the first time. When Bernadette held out pen and paper and asked her to write her name, the Lady said: ‘it is not necessary and added “I do not promise to make you happy in this world but in the other. Would you be kind enough to cone here for a fortnight.”

4. On Friday 19th Feb Bernadette went to the Grotto with a lighted blessed candle (the origin and practice of taking candles and lighting them before the Grotto.) This was a short and silent apparition.

5. On Saturday 20th Feb; Again silence. Though the Lady taught her a personal prayer. At the end of the vision, Bernadette was overcome with sadness.

6. On Sunday 21st Feb. The Lady appeared very early in the morning (about 100 people present). Afterwards the Police Commissioner, Jacomet, questioned Bernadette to tell what she had seen. Bernadette would only speak of “Aqueco (local dialect for “that person.”)

7. Bernadette is Surrounded at the Grotto by 150 persons. The Apparition reveals a secret “for her alone.”

9. Thursday 15th February (The Spring) Three hundred people present. Bernadette related: “She told me to go drink of the spring”. I only found a little muddy water. At the fourth attempt I was able to drink. She also made me eat the herbs that were found near the spring, then the Vision left and went away.” In front of the crowd they were asking “Do you think that she is mad doing things like that?” She replied “It is for sinners.”

10. On Saturday 27th February. 800 people present. The Apparition is silent. Bernadette drinks the water and carries out her usual acts of penance.

11. On Sunday 28th February (“Penance”) Over 1000 present. Bernadette prays, kisses the ground and moves on her knees as a sign of penance She is then taken to the house of Judge Ribes who threatens her with prison..

12. On Monday 1st March: The first miracle. Over 1500 people assemble and among them, for the first time a priest. In the night Catherine Latapie, a friend from Lourdes, goes to the Grotto. She plunges her dislocated arm into the water of the Spring: her arm and her hand regain their movement.

13. On Tuesday 2nd March: Message to the priests. The crowd becomes larger and larger. The Lady asks her: “Go, tell the priests to come here in procession and to build a chapel here,” Bernadette tells this to Fr. Peyrama1e the Parish Priest of Lourdes. He wants to know only one thing: the Lady’s name. He demands another test: to see the rose bush (or wild roses) flower at the Grotto in the middle of winter.

14. On Wednesday 3rd March at 7 clock in the morning, in the presence of 3000 people, Bernadette arrived at the Grotto, but the vision did not Appear! After school, she hears the inner invitation of the Lady. She goes to the Grotto asks her again for her name. The response is a smile. The Parish Priest tells her again: “if the lady really wishes that a chapel be built, then she must tell us her name and make the rose bush bloom at the Grotto.”

15. On Thursday 4th March. The ever greater crowd (about 8000 people) wait for a miracle at the end of the fortnight. The vision is silent. Fr Peyramale sticks to his position, for twenty days Bernadette does not go to the Grotto: she no longer feels the irresistible invitation. 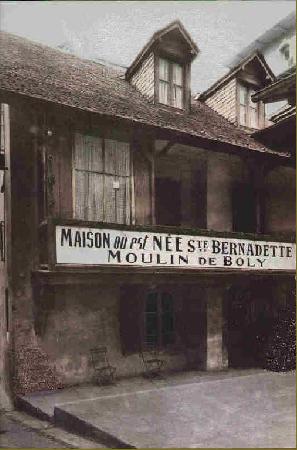 16. Thursday 25th March: The Vision finally reveals her name, but the wild rose bush, on which she stood during the apparitions, does not bloom. Bernadette recounts: “She lifted up her eyes to heaven, joined her hands as though in prayer, her hands that were held Out and open towards the ground; and said to me: QUE SOY ERA IMMACULADA CONCEPCIOU The young visionary leaves the Grotto running and repeating continuously the words that she did not understand. The word troubled (and convinced?) the brave Parish Priest. Bernadette herself was ignorant of the that this theological expression was assigned to the Blessed Virgin four years earlier when Pope Pius IX declared it a truth of the Catholic Faith.

17. On Wednesday 7th April. Miracle of the candle. During this Apparition Bernadette kept her candle alight. The flame licked along her hand without burning it. A medical doctor, Dr Douzous, immediately recorded his witness to this fact.

18. Thursday 16th July. Last Apparition. Bernadette received the mysterious call to the Grotto, but her way was blocked and closed off by a barrier. She arrived on the other side of the river Gave, in the meadow across from the Grotto. “I felt that I was in front of the grotto, at the sama distance as before I saw only the Blessed Virgin, never was she more beautiful”

1858 Meanwhile on Wednesday 3rd June Bernadette at last made her First Holy Communion in the Chapel of the Hospice of Lourdes.
1858 July 21st Bishop Laurence of Tarbes constituted a court of enquiry into the happenings of Massabielle.

1860 February 5th Bernadette was confirmed (nearly two years after the first Apparition, and at the age of 16). In July Bernadette became a boarder at the hospice of Lourdes run by the Sisters of Nevers.

1862 January 18th: Bishop Laurence acknowledged the authenticity of the Apparitions of the virgin Mary at Massabielle.

1862 April 28th. Bernadette become very ill with pneumonia and received the Sacrament of the Sick.

1864 April 4th. Unveiling of the statue of Our Lady at the grotto. The rector of Lourdes and Bernadette were not present on account of illness.

1866 May 19th. Consecration of the Crypt chapel by Bishop Laurence. Bernadette was there and saw the first stage of Our Lady’s request for a Chapel fulfilled.

May 21st. First Pontifical Mass offered at the grotto. 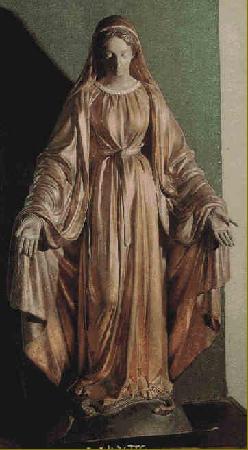 July 4th. Bernadette leaves Lourdes to go to the convent at Never~. (And she never returned).

July 8th. Bernadette narrates the of the apparition~, for the benefit of the Convent community. She will speak about them again except under orders from her Superiors.

July 29th. Bernadette received the religious habit, and was given the name of Sister Marie-Bernard.

October 25th. Bernadette receive the Sacrament of the sick and pronounced her vows
(“In aarticulo mortis.”)

1867 October 30th, Sister Marie-Bernard pronounced her religious vows. She was to remain at the Mother House.

1873 June 3rd. For the third time Sister Marie-Bernard received the Sacrament of the Sick.

1875 After having nursed the sick sister and helped in the sacristy Sister Marie-Bernard had no other occupation but that of being ill.

1876 At the request or the Bishop of Nevers, Sister Marie-Bernard wrote to His holiness, Pope Pius IX.

1879 March 28th. Sister Marie-Bernard received the Sacrament of the sick for the fourth time.

1879 Easter Tuesday. April 16th. At about 3.15 pm. Sister Marie-Bernard died a most holy death in the sick room of “Sainte Croix” in the Convent of St Gildard at Nevers.. She had said “I am happy to see my Heavenly Mother again”.